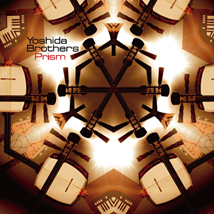 The band’s newest album, Prism, has finally hit our side of the Pacific, and it is well worth the journey. The album opens with the pounding drums, distortions and flutes of the Yoshida Brother’s cover of Radiohead’s “The National Anthem” and takes the listener on a journey of strange and wonderful songs, each with their own unique genres and instrumentation.

Some highlights of the album include the haunting female vocals on “One Long River” and the blindingly fast shamisen riffs on “Hujin.”