The Harder They Come: May 29-June 4 @ Downtown Independent 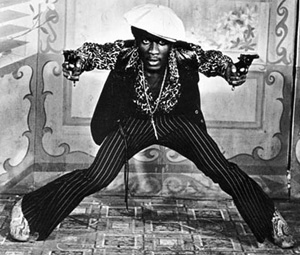 The Harder They Come is a pivotal film, not just for music but culture as a whole. In 1972, Perry Henzell – after being educated at schools in England and Canada – decided to film a movie in his home country of Jamaica. Heavily incorporating the lifestyle surrounding him in Kingston, Henzell wrote a script about Ivanhoe Martin, a reggae singer who turns to selling weed and (spoiler alert!) epically dies on a beach in a shootout with the cops.

Henzell hired local reggae singer Jimmy Cliff to play the lead, created one of the most iconic soundtracks of all time and ¬– through midnight showings across America – introduced then-unknown reggae to the world’s quickly evolving musical landscape.

For its first U.S. theatrical run in decades, The Harder They Come is taking over the Downtown Independent with its all new 35mm digitally remastered print. And with midnight shows through the weekend and bi-nightly through next week, the seminal dub movie is the perfect way to experience downtown Los Angeles’ newest best place to see underground films.

A 200-seat theater with 16 comfy reclining sofas and stainless-steel-and-shiny-white-plastic modern architecture are the highlights of the DI’s charm. Its support for all things independent – like being the home base for Zero Film Festival and hosting fixed gear movie Macaframa premiere – makes it a cross between Cinefamily’s programming and REDCAT’s aesthetic vibe.

So, get on a train or a bus or a bike because downtown is the new Westside, and this weekend’s movie is not only an exhilarating example of early ’70s cinema, but the success of its message proves the often unexpected strength of grassroots projects and shows how film has been instrumental in the spread of local cultures to the global psyche.