Wanna Dance?: “So You Think You Can Dance” returns for fifth season. 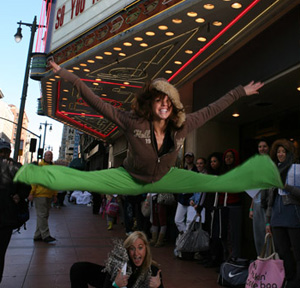 Two “So You Think You Can Dance” alumni, Lacey Schwimmer (season three) and Chelsie Hightower (season four), were professional partners to Steve-O and Ty Murray, on the season of “Dancing With the Stars” that just ended. Last season’s Kherington Payne has a role in the updated film version of Fame (releasing Sept. 25, 2009).

And not one of these ladies was even the winner of their respective seasons. Such is the caliber of talent that can be found on this reality competition program.

The series follows the format of “American Idol” (It was created by “Idol” producers Simon Fuller and Nigel Lythgoe.). Three judges – Lythgoe, the boisterous Mary Murphy and a guest choreographer – send the best dancers from around the country to Las Vegas for a grueling test of their abilities. The top 20 move on and are paired up with a partner they must perform with on every episode.

Each couple is given a genre and world-famous choreographer to work with for the week. After their performances, viewers vote on which couple (when it gets to the top 10, viewers vote on individuals) should be eliminated, but the judges select which dancer ultimately leaves.

The amazing choreography is the best reason to watch this show. Host Cat Deeley’s sometimes-zany wardrobe is another. The show is so popular that they have already begun casting for the next season that will debut in the fall – the first time two cycles of the show will air in the same year.

If you think you have what it takes to be on the show, you can audition for season six Friday, June 12 at the Orpheum Theatre (842 S. Broadway, Downtown). Download all the forms and get more information at fox.com/dance.