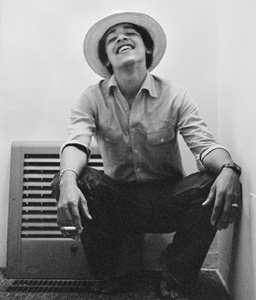 Is someone born to be president, or do they become “presidential” through their life experiences and become president? The inaugural exhibit of black and white photographs by Lisa Jack being shown at the M+B Gallery holds some clues to an answer.

The photographs hold a visual key into how “Barry” Obama transformed from a youthful, undecided, yet charismatic photographic subject into the self-assured, educated and competent man who is now the 44th President of the United States. These photographs are also intriguing, because they were featured in Time magazine’s 2008 Person of the Year issue, when Obama was only the president-elect.

The M+B exhibit Barack Obama: The Freshman consists of a series of photographs Lisa Jack took 28 years ago of the young Barry Obama, when Jack was a freshman at Occidental College. Obama freely explained this time at Occidental in his memoir, Dreams from My Father, as a period filled with a sense of confusion and his search for “self.”

Jack was studying photography and searching for subjects for a portrait project when she heard about a freshman named Barry Obama. After photographing Obama, Jack’s life took another turn, and she locked the photographs away. Jack ended up studying psychology, and she’s currently a professor of Counseling Psychology at Augsburg College.

But after sitting for these photos, Obama became politically active and transferred only a year later to Columbia. After going to Columbia, it is well-known that Obama found his sense of purpose.

Jack was dared by a friend to bring these photographs out in the open, and this exhibit will be the first time these photographs are printed and put on display. An artist’s opening reception takes place at the gallery May 28 from 6 p.m. to 9 p.m.