Mummies: Death And The Afterlife In Ancient Egypt … Treasures From The British Museum: Ongoing through April 15, 2007 @ The Bowers Museum of Cultural Art 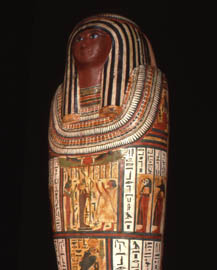 Writing this during Passover (sorry, Rabbi), you’d think my interest in Ancient Egypt would have reached its saturation point after the second of two three-hour-plus Seders. Usually, they’re shorter because we have the crib sheet of The Ten Commandments to watch, but for a reason that doesn’t make sense to the Private Jewish Day School boy in me – they decided to air it around Easter. The networks didn’t even have the decency to run Prince of Egypt or Phar-Oh-God! on late-night Cinemax.

However, to get back to the first sentence, my interest in Ra and Co. has not been squelched, and I recommend – even for those Orthodox Jews that pull all-nighters for the Seders – The Bowers Museum’s mummy exhibit. Although LACMA will be unveiling their crème de la sand King Tut exhibit soon, the whole thing has the desperate feel of Carnisaur being released two months before Jurassic Park came out.

Still, The Bowers’ exhibit boasts one of the largest single displays of mummies and coffins in history while exploring the methods and mythology around the process of wrapping corpses in gauze. This ancient practice included the removal of the brain through the nose – which, even though I was told this in third grade, I still don’t get. There are 140 objects on display, including 14 mummies and their coffins.

So, when your stomach has felt its last matzah-induced cramp and the macaroons that no one eats are tossed out, head over to Santa Ana and momentarily quench your thirst for mummies until LACMA decimates The Bowers Museum like the British Museum did the pyramids.