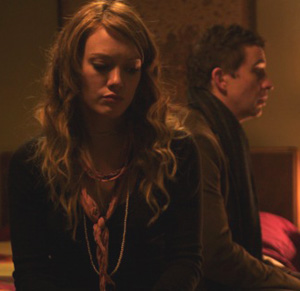 Hilary Duff and Steve Coogan in What Goes Up
(Credit: Courtesy of Safety Glass Productions)

If What Goes Up must come down, look out below because a downpour of putrid filmmaking is in the forecast.

Steve Coogan stars as Campbell Babbitt, a morally comprised journalist who meets and befriends a motley crew of high school students when he’s sent to their small New Hampshire town to cover local hero, Christa McAuliffe, the “Teacher in Space,” who was part of the Challenger mission. Babbitt’s arrival coincides with the suicide of a friend he hasn’t spoken to in years, a teacher now worshipped by his class of “unteachables,” including Juno’s Olivia Thirlby, the requisite pregnant teen whose condition is announced by the typically cliché sounds of retching from behind a ladies’ room door; Hilary Duff as the high school Lolita who calls to mind Mena Suvari in American Beauty … if American Beauty was being performed as dinner theater in Boca Raton; and Josh Peck, whose slack jawed, bleary eyed, weepy, muttering performance was already seen in The Wackness.

Set in 1986, on the eve of the Challenger disaster, director and co-writer Jonathan Glatzer and his partner, Robert Lawson, choose that harrowing moment in America’s collective memory for absolutely no discernible reason. The historical significance proves to be entirely inconsequential as the story unfolds. It’s an unexplored afterthought, cast aside in place of disjointed vignettes of Lolita longing or teenage angst indulgences. Much like the rest of the film, it’s inexplicable and unrealized.

I’m still trying to reconcile and comprehend Molly Shannon’s involvement in this contrived, poorly executed and ill-conceived debacle. And I thought “Kath & Kim” was bad.

The film was adapted from Lawson’s play and the phantom limbs of the original production weight down an already sodden mess considerably. Glatzer seems to have forgotten that celluloid requires a director to craft each scene and frame. Visually uninteresting, unimaginatively staged, lacking immediacy and texture, Glatzer took a blanket approach that might have worked for an audience sitting in the mezzanine, but which falls flat and lackluster onscreen. Still, even the most skilled visual technician would be hard pressed to salvage this impenetrably dreadful script.

What Goes Up arrives in theaters with technical glitches, the kind of terrible audio that usually denotes student films, mushy focus and a host of other off-putting ailments that do nothing to elevate a flat-footed script and amateurish, misguided direction.


What Goes Up is currently in select theaters.
Article posted on 6/1/2009
This article has been viewed 1516 times.