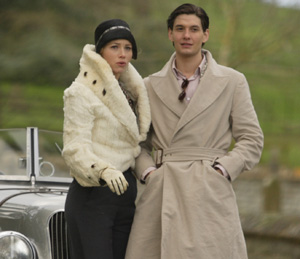 A comedy that boasts unconventional camera angles, a playful soundtrack appropriate to the story’s 1930s setting and an ill-fated puppy named Poppy (real name: Fizz), Easy Virtue has got a lot of charm and – though the best jokes are also the dryest, set somewhat few and far between – sharp, cheeky, unmistakably English humor. Kristin Scott Thomas plays the wicked mother, the protective force who shields her family from the world, the arch nemesis of her son’s new, older, glamorous wife.

Colin Firth is, without a doubt, perfect, as Mr. Whittaker, the scruffy father who acts as the light-hearted counterpart to nearly each member of his family, yet in moments of solitude or alone with like-minded Larita, reveals a source of melancholy that comes through in his thoughtful gaze. And sisters Hilda and Marion, younger siblings to Larita’s husband John, daughters to the Whittakers, are perfect comedic sidekicks; particularly Marion (Katherine Parkinson), whose itsy-bitsy English voice and natural timing make her ideal for dry comedy. Were Easy Virtue actually The Rocky Horror Picture Show, in fact, she’d be the Magenta to Hilda’s Columbia. And though Hilda’s nips don’t peer over a corset at film’s end, Hilda does wear a corset and no underpants while doing the can-can at one point, so perhaps the similarities aren’t terribly out of left field.

What throws this film is Jessica Biel, horribly miscast as the ambiguously likeable Larita. Even in this role, she’s a beautiful tomboy at best, and her naturally casual attitude doesn’t convert well into the combination of continental accent, impatient cigarette break and dreadfully blonde mane that comprise her. While her character’s meant to stand out among the British family she’s married into, Biel herself stands out as an actor both less natural and lacking real chemistry with the remainder of the film’s cast. If stunning newcomer Charlotte Riley (the token girl next door, Sarah) had played the role of Larita, perhaps adapted to a Brit, the film could have been wildly successful in execution. That, anyway, and a less predictable conclusion.

Let this also be the last time Biel refers affectionately to anyone as “the mother of my panda.”


Easy Virtue is currently in theaters.
Article posted on 6/1/2009
This article has been viewed 2196 times.