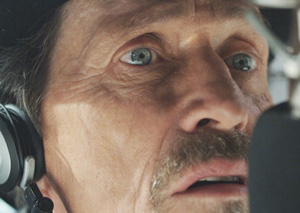 This movie is set in Pontypool, a one-horse town in Ontario, Canada, in the middle of a long, dark, bleak winter. The main character, Grant Mazzy, is also in the winter of his career as a radio disc jockey.

Mazzy is played extremely convincingly by Stephen McHattie, with a grizzly voice, cowboy hat and a broken swagger that suggests better times. I couldn’t help but feel a nagging bit of nostalgia, as this character seems to be a dead ringer for fallen talk radio star Don Imus.

We meet Mazzy as he’s driving through a hellish snowstorm to his newest gig as Pontypool’s morning man. There, in this makeshift studio under an abandoned church, we meet Mazzy’s two other partners in “radio-making” – Sydney Briar (Lisa Houle) and Laurel Ann (Georgina Reilly).

Other than a vivacious Hrant Alianak, who steps heroically into the second act and plays a wide-eyed and frenetic Dr. Mendez, we don’t really get to see many more of Pontypool’s citizens. We just hear about them and their untimely demise as Pontypool is taken by a deadly, incomprehensible virus that turns people into mindless, cannibalistic zombies.

What I appreciated most about this movie is how the horror of what goes on in Pontypool is shown through the expressions and the skillful acting of McHattie, Houle and Reilly. We barely see the hands and faces of Pontypool’s “infected” citizens, yet we live out the horror of that day’s events in the faces and the wide eyes of this most amazing ensemble cast.

Bruce McDonald gets high marks for his artful suspense-building, and his success at bringing the best out of these actors.

McDonald should also be lauded for his restraint. So many zombie movies become uninteresting because of the seemingly inevitable mummy-like walking and clichéd acting of the people who play the zombies. Pontypool makes an effort at being unique in that sense and in many other ways.


Pontypool is currently in select theaters.
Article posted on 6/1/2009
This article has been viewed 1638 times.