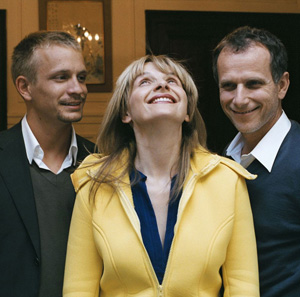 Olivier Assayas’ multi-layered ode to French society, Summer Hours, exists on several planes simultaneously. On the surface, the film is about the dynamics within a family competing with its very modern struggles. But it’s a work that lingers – dig deeper and the complexity of this film will leave the viewer with plenty to ponder long after the final credits roll.

Summer Hours follows three generations of the Berthier-Marly clan through a skillfully interwoven tapestry of family tradition, politics, guarded secrets and passion. The film opens on a family gathering, which culminates with matriarch Hélène (Edith Scob) pulling her eldest son Frédéric (Charles Berling) aside to recount business affairs and wishes in the event of her death. A lively woman at 75, she lives alone in the home of her famous late uncle, a celebrated artist, surrounded by the numerous coveted works of art that for her, serve to keep his memory alive.

For Frédéric, the obvious choice is to keep the house and preserve its precious contents for the family to enjoy for future generations. But when faced with the situation in reality, it becomes clear that his other two siblings, Adrienne (Juliette Binoche) and Jérémie (Jérémie Renier), have very different views on the handling of their mother’s estate and their plans for the future.

The plot thickens as we learn of the true nature of Hélène’s obsession with her uncle through the scattered memories of each character. Family revelations reveal that Hélène was much more than a mere muse to the artist.

Assayas has chosen not to write another film about grieving the loss of a parent, indeed grief in the traditional sense factors little here. Assayas instead mourns the death of an époque: family members scattered across the globe, Parisian commuters invading the countryside surrounding the Berthier estate with little regard for the area’s history and priceless heirlooms better sold off at auction lest the family finances be whittled away by the tax man.

A powerful testament to the side effects of globalism, Summer Hours concludes in metaphor with the younger generation hosting one last shindig in the cherished family home before it passes into new hands. For a fleeting moment the spirited youthfulness that welcomes all things new peacefully coexists with the venerable past.

Will the spirit that gave France her charm adapt and thrive, or will a bygone era linger in the psyche of France’s youth like a promised inheritance forgotten? Thankfully there’s enough breathing room for the audience to draw their own conclusions.


Summer Hours is currently in select theaters.
Article posted on 6/1/2009
This article has been viewed 1521 times.