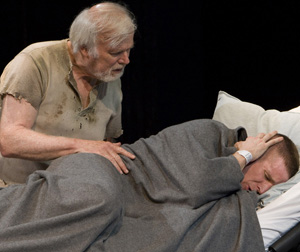 This world premiere play, written by Rajiv Joseph and directed by Moisés Kaufman, tells the story of two soldiers’ internal conflicts after assassinating a Bengal tiger and the psychological and emotional damages that result from war.

There were a few notable performances by Kevin Tighe as the tiger and Brad Fleischer as the haunted soldier who assassinates the tiger while trying to save his comrade from the tiger’s attack. The set design was elaborate and beautifully orchestrated by Derek McLane.

Although the play itself leaned towards melodramatic moments and a very “film-like” feeling, it could not have given the audience a better glimpse or understanding of the severe psychological damages of war from both the soldier’s and civilian’s perspectives, the struggle of communication between people of two languages and the terrible consequences of greed.

On a side note, resident DJs spin on Thursday, Friday and Saturday nights, and the cast and crew mingle for cocktails and conversation.