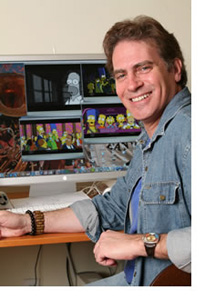 The UCLA Festival of Animation Prom 2009

Since 1959, this animation festival has been a tradition on UCLA’s campus, and this year is no exception. Formed to present a new collection of student films produced in a full range of styles, this event will also be honoring animation alumnus David Silverman, a director of the hit show “The Simpsons,” as well as the film based on the television show.

The Prom 2009 Festival of Animation is part of “UCLA Festival 2009: New Creative Work.” This nine-day celebration of the newest work by students from the UCLA School of Theater, Film and Television will take place June 5 through 13, with the animation festival and honoring of Silverman taking place on the 6th at 5:30 p.m. at the James Bridges Theater on campus.

Other notable events include the Festival 2009: Design Showcase West that will feature the design work of students graduating from top-notch design programs from the likes of UCLA, USC, Cal Arts, NYU, Yale, Carnegie Mellon, UT Austin and North Carolina School of the Arts. The Design Showcase West, held June 9 in Freud Playhouse at UCLA and the only national entertainment design exhibit on the west coast, will feature more than 50 students’ work in costume, set, scenic, sound and lighting design.

Admission to the festival is free, but space is limited for certain events and reservations are required, so visit tft.ucla.edu/festival to reserve your spot and check out a full listing of events.

Staying in Los Angeles over the summer and have nothing to do? If you’re a Trojan, consider participating in Summer Intramural leagues and tournaments on campus.

Summer intramurals start off with dodgeball before moving on to softball, golf and soccer. There’s something for everyone, as leagues and tournaments will include softball, tennis, golf, racquetball, basketball and three-on-three soccer.

Registration is $20 per team and is only open to USC students, faculty, staff and alumni. For more information, visit usc.edu/recsports.

The USC Annenberg School for Communication will present its annual conference on the impact of new technologies on public service media. The conference will consist of attendees from around the world, gathering to discuss advancing the public interest through media.

Titled “Public Service Media from Local to Global,” this year’s conference will examine issues of participatory digital public media and explore them from a global perspective. The conference will span over two days, beginning June 3 and will feature workshops and breakout discussions with media leaders.

Registration for Annenberg students, faculty and staff is free, while registration for the general public can be a bit pricey at $225 a pop. However, fees include daily continental breakfast, lunch and opening and closing receptions. For more information, visit bb2009.uscannenberg.org