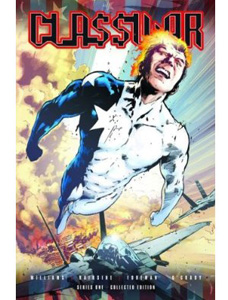 Cla$$war, the debut graphic novel by writer Rob Williams is now available in a deluxe hardcover edition. It takes place in an alternate present where unseen corporations control the government, the president is little more than a puppet. Sounds familiar, right?

The twist is that this America also has an elite squad of superheroes to enforce its foreign policy. That is, until the team’s leader grows a conscience and wages a war against the corrupt government.

The beautiful action scene artwork really pops in this deluxe edition. Even if the concept of the shadow government feels a little underdeveloped, it’s refreshing to have a politically charged comic that doesn’t skimp on the action either.