Control Fight: To Wii or Not To Wii 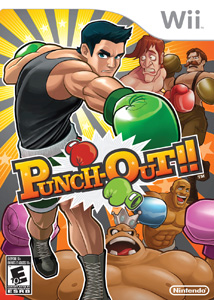 Games for the Nintendo Wii seem to fall into one of a few categories. Setting aside cross-platform games and remakes, half of the remaining games draw on the casual and hardcore gamers’ senses of nostalgia. The other half is all about using the Wii’s unique controls as a springboard to create some of the most original, engrossing games on any system.

The new “Punch-Out!!” for the Wii is the perfect mix of the two. Fans of the classics from Nintendo and Super Nintendo will get the instant, familiar joy of crushing a Bull Charge or knocking King Hippo flat on his flabby butt. New players will be able to encounter the quick-paced boxing action and the cast of quirky characters in the full glory of cell-shaded 3D. Combined, the experience gives players both the thrill of intense pugilistic competition and the charm of a well-aged, classic series.

In addition to the new art style, the challenges in Exhibition Mode, and the full voice cast that really brings the world of “Punch-Out!!” to life, one of the truly great additions to the game is the option to make use of the Wii controls. Like so many other boxing games on the Wii, “Punch-Out!!” lets you swing the two-fisted controls manically at the screen in the hopes that your animated avatar will knock its rendered foe to the canvas. The game even gives you the unique option of adding the Wii Fit Balance Board to the mixing, allowing you to duck and dodge by shifting your body weight for even greater immersion into the fighting experience.

Of course, the addition of these enhanced control options brings with it the classic Wii conundrum. Should you take up the controller and Nunchuk to get the full flying fist experience of the game, or should you turn the controller on its side for some intense two-button classic bashing?

Truth be told, the ability to shift your body weight to dodge a blow and then follow with a vicious controller swing to the jaw adds a world of fun to this already amazingly enjoyable franchise. Whatever accomplishment you would normally feel by reading a subtle eyebrow twitch or glowing gem and quickly countering your foe is somehow amplified when you are no longer just tapping the d-pad, but rather heaving your body to one side to make Little Mac jump out of the way. It is the sensation that you are somehow actually in the game rather than tapping away at a small electronic controller.

That said, there are flaws to this system. The Balance Board can be a bit oversensitive, making you dodge left instead of right because you planted your left foot to help shift your weight. Likewise, it can be undersensitive at the worst possible times, leaving Little Mac staring at a punishing right hook that you could have easily avoided had you been pressing the right button. Even removing the Balance Board from the equation can make victory more difficult as you must constantly remember where your left hand is aiming the thumbstick while you are punching. This, of course, is all in addition to the sheer nostalgia of playing “Punch-Out!!” with a two-button controller.

When all is said and done though, “Punch-Out!!” is a great update of the classic series that will draw in old and new gamers alike. Best of all, you can always switch controls when you have a tough challenge or when you just feel like punching out all of your aggressions.