Looking For Fun in Europe?: Switzerland “Towers” Over the Others 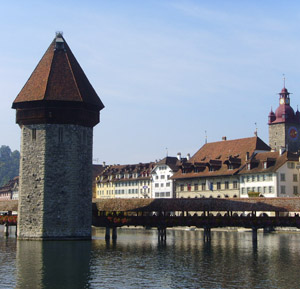 Before you head out the door on your way to Switzerland, you’ll need to issue a little apology. You may feel silly doing it, but go ahead and tell your camera that you’re kind of sorry that it’s going to have to work so hard while you’re having all the fun!

Switzerland is so full of beautiful scenery and unique things to photograph that your little memory-maker will be busy, busy, busy. A good way to smooth things over with your digital friend though would be to make a stop at the place where all the cool cameras go; the most-photographed spot in the country. Hint – it’s not the Matterhorn, but it is something that “towers!”

I started my Swiss adventure by spending a couple of days in Zurich, exploring by hopping on and off trains, trams, buses and boats that are all part of the public transportation system. Part of the city is nestled around Lake Zurich, and the day I arrived the sun was giving the water such a sparkle that I had to get out there first thing.

There are dozens of options for taking a cruise, but the easiest way is to board one of the river boats that sail a circular route around a portion of the lake’s perimeter. The boats sail slowly but with Swiss precision, so if you disembark to stroll through a park, visit a chocolate factory or stroll through a charming neighborhood, you can rest assured that the next boat will be along right when it’s supposed to be.

Zurich has more than 2,000 years of history to share with you, and high on a hill above Lake Zurich are the remains of the ancient walls that once surrounded and protected the city. Peer over them for a spectacular view of the city hard at work and play below.

A stroll through Zurich’s Old Town is a treat too, especially if you enjoy different types of architecture. Old Town is far from stuffy though; the area is a vibrant place to shop, people watch or find a cozy place to have a traditional Swiss meal like fondue or the veal and mushrooms dish called Zurich Geschnetzeltes.

A really cool retail shop to visit in Zurich is the Freitag store. This is the home of the famous messenger bags made from recycled materials that are so unique that they’ve been displayed at the Museum of Modern Art in New York City. The store offers about 40 different products, and no two items are alike.

You can’t miss the store either; it’s housed in a stack of recycled shipping containers! The first few floors are lined with shelves full of the bags, but if you want to see another side of Zurich, climb the stairs all the way to the observation deck atop the stack.

It takes about four hours by train to get from Zurich to the Lake Geneva area and the city of Lausanne. The lakeside is only a few minutes ride by bus from the train station, and the city has preserved lots of land along the shoreline for pedestrian use.

One particularly picturesque stretch of the walkway passes by the world-renowned Beau Rivage Resort where the building itself is magnificent, and the immaculately-tended grounds are filled with statues and monuments. Lausanne is the home of the International Olympic Committee and just past the Beau Rivage you’ll find a series of outdoor escalators that take you up to the Olympic Museum.

If you’re a sports or Olympics enthusiast, you’ll be thrilled with the displays here. Equipment and memorabilia from every conceivable era and event are on view along with ancient Olympic artifacts and a collection of torches from the modern day.

After you’ve thoroughly enjoyed Lausanne (don’t miss the Durig chocolate factory and the city’s nightclub hotspot, Mad), get back on the train and follow the lakeshore to nearby Montreux, a music-loving city famed for its annual jazz festival (but it has a lot of rock ’n’ roll history, too). This is the place described in Deep Purple’s classic rock hit “Smoke on the Water,” and many big rock bands from that era, including Led Zeppelin and Queen, recorded in Montreux at the (now defunct) Mountain Studios.

Queen’s Freddie Mercury loved this part of the Swiss Riviera so much that he lived here for quite awhile and visited one last time shortly before his death. The city has erected a monument to Mercury by the lakeshore, and fans regularly leave tribute items at the base of the statue. The nearby Bazar Suisse souvenir shop carries an exclusive line of Mercury-related items that are licensed by his estate that cannot be found anywhere else in the world.

On the last leg of my big circle through the bulk of Switzerland I stopped at Lucerne on my way back to Zurich. Lucerne is one of the most picturesque of all Swiss cities, and here is where you’ll find the most photographed item in the country – the 700-year-old water tower that sits adjacent to the equally historic Chapel Bridge over the Reuss River. The pedestrians-only bridge is lined with flowerboxes overflowing with blooms, and the surrounding area is completely charming making it easy for photographers to line up a perfect shot of the tower from almost any angle.