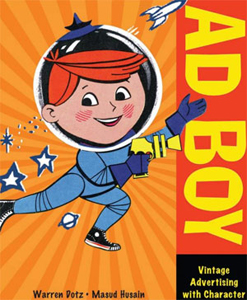 It has been said that all advertising sells but one thing: happiness. In the era following the Second World War this idea was put to work in thousands of advertising campaigns.

A race was on to create the most delightful and charming images, giving birth to a plethora of smiling faces on everything from lions, tigers and bears to bananas, oranges and avocados. There was no object that could not be anthropomorphized and slapped with a smile.

Art designers had a field day, and a golden age of advertising art dawned with wonderfully wacky images. Such icons as Sir Grapefellow, Mr. Clean and the Kool-Aid pitcher were born in this era, but for each that survived the 20th century, there are a thousand others who have been lost in time.

With the release of Ad Boy many of these characters live again. Authors Warren Dotz and Masud Husain, both collectors and historians on the subject, offer insightful commentary on the social and cultural contexts of the ads.

The book is a valuable edition to libraries of advertising students and art designers. For the rest of us children of capitalist America, it is a very amusing reminder of a bygone era when advertising was just a little less sinister.