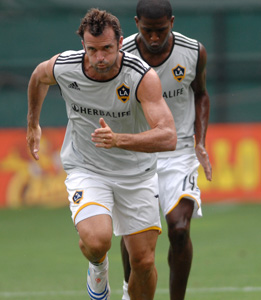 Most teams would be happy with a 10-game unbeaten streak – unless, of course, eight of those matches end up in a draw.

For the Los Angeles Galaxy, Saturday’s match against the Kansas City Wizards could have been something more than a tie, as both the team’s head coach and star player expressed frustration over what they believed should have been a win.

“It beats losing,” Galaxy head coach Bruce Arena said about the 1-1 tie against Kansas City (4-4-4). But the Galaxy (1-1-9) settled for a tie for the fifth consecutive match.

Tying certainly beats losing. Yet the Galaxy felt they did all the things necessary to win. Despite playing a man down since the 58th minute, the Galaxy had several chances to win, but for two shots blocked by the crossbar and a miraculous save by former Galaxy keeper Kevin Hartman.

“We were a little unlucky,” says Galaxy forward Landon Donovan. “We could’ve been better in front of goal.”

With the Galaxy a man down, the Wizards scored the game’s first goal in the 84th minute. But Buddle, tied the game in the 87th minute on a pass from Donovan, robbing the Wizards of three points.

“It’s disappointing when you’re winning 1-0 with a man advantage and you don’t close out the game,” he says.

Both teams have to settle for one point. For the Galaxy, it was the sixth time this season a match ended in a 1-1 tie.

(Note: Only nine of the 10 matches during the unbeaten strike count for MLS points; one tie against the Colorado Rapids was for a U.S. Open match April 7.)