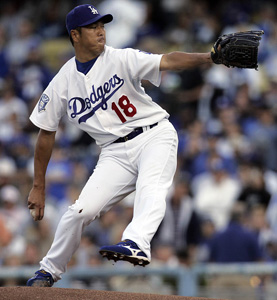 Few Dodger fans can forget game three of the National League Conference Series against the Phillies last year. The Dodgers were down in the series two games to none and had endured multiple indignities perpetrated by Phillies pitchers throwing dangerous high and inside fastballs.

It was in the third inning of that game after catcher Russell Martin was nailed by yet another inside fastball from Phillies pitching that the Dodgers responded like any self-respecting baseball club. Dodger pitcher Hiroki Kuroda threw a fastball a good foot over the head of Phillies Shane Victorino, not to hit him mind you, but to send a very clear message that abuses on the part of the Phillies pitchers would not go unanswered.

Well, wouldn’t you know, Victorino had to go and have a big pissyfest at the plate, shouting something incendiary at Kuroda. Moments later when he bounced out, more words were exchanged and in no time the benches of both teams were cleared as players stormed the field in a display of bravado which nearly turned violent.

In a passionate show of devotion to his team Manny Ramirez came racing in from left field to defend their honor. He had to be restrained by several players, but in that moment, he managed to solidify his place in the hearts of Dodger fans. The Dodgers would go on to win that game, but alas, lose the series. And the Phillies, as we all know, would go on to become World Champions.

This Thursday, June 4, the Phillies are back in town for a four-game series, the first time in Los Angeles since last year’s conference series and the last time during the regular season. But my how things do change. While the defending world champs are scrambling to maintain a measly one game lead for first place in the Eastern Division, the Dodgers are cruising with a substantial lead in the west. You can bet the Dodgers would love nothing more than to make them squirm a little.