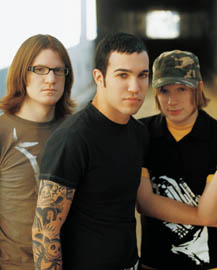 "Fanaticism is like this really fine line between being really in love with something and being completely obsessed by it," says Pete Wentz, bassist for Fall Out Boy, about the loyal connection between the boys and their fans.

"The kids that come to the show who are in the front row, they live it," says singer Patrick Stump, in defense. "Those people are dedicated to us but we’re dedicated to them too. Because at this point, they’re just our friends, you know?"

After releasing the 2003 debut album Take This to Your Grave, Fall Out Boy reaped its share of fanatical fans. But what’s unique about the band compared to other up-and-comers is their list of accolades from the media and critics alike. Alternative Press deemed their latest album, From Under the Cork Tree, one of the "Most Anticipated Releases of 2005," while MTV called Fall Out Boy a "band to watch in 2005," and even sourpuss Rolling Stone named them one of this year’s "10 Artists to Watch."

But surprisingly, Fall Out Boy has found little success on the airwaves. So how exactly has this band from Chicago created such a buzz and a huge fan base without being on the almighty FM playlist?

"We went on tour and earned people one by one," says Wentz, who toured with guitarist Joe Trohman, drummer Andy Hurley and singer Patrick Stump in broken down vans to complete 550 dates in two years. "Shows would get bigger on a daily basis," adds Stump, "really, really gradually."

With the whole DIY mentality these days, Fall Out Boy apparently took the idea by the reins and galloped forward, full speed. For example, their Christmas song, "Yule Shoot Your Eye Out," managed to become one of the most downloaded songs on the Internet and a standout on the compilation album A Santa Cause: It’s a Punk Rock Christmas.

"With the influx of satellite radio and downloading, radio is just not as important," says Wentz. "The problem with the music industry is that they regard peer-to-peer downloading as the enemy. We kind of embrace it – not necessarily by choice, but because that’s what was going to happen."

And let’s not forget the force of those fanatical fans; you know, those "front-rowers" that seem to be at every show. The boys deliver live – with Stump’s melodic voice fused with hard-edged, adrenaline punk – making most kids want to jump and surf the crowd, get slammed to the floor and then continue screaming the lyrics to every song. No wonder they keep coming back for more.

In addition, the boys do have a penchant for humor. The band’s first single, "Sugar, We’re Goin’ Down," is a conservative one compared to their other song titles which are often sarcastically comical.

"The interesting thing about the titles is that, in my head, they always make perfect sense," says Wentz, when asked about the person who inspired, "You’re a Concrete Boy Now (Do Your Part to Save the Scene and Stop Going to Shows)." Without explaining, he says, "I really don’t want to give anybody any fake celebrity off these new songs because they generally weren’t great people."

Other winning titles include "I Slept with Someone in Fall Out Boy and All I Got Was This Stupid Song Written About Me" and "Our Lawyer Made Us Change the Name of This Song So We Wouldn’t Get Sued."

But with all the accolades splashed around the media and being hyped the "next big thing," how does the band deal with the pressure?

"If we’re the ‘next big thing’ or not, this is the coolest things that we’ve ever had the chance to do in our lives. I don’t care, it doesn’t really matter to me," says Wentz about aspiring to nametags. "What’s more important to me is what those kids who have been there since the beginning think of us. That’s what matters to me."

From Under the Cork Tree is currently available. Fall Out Boy will play the Vans Warped Tour on July 1 at Cal State Long Beach, July 3 at Seaside Park in Ventura, and July 6 at Pomona Fairplex in Pomona. For more information, visit www.falloutboyrock.com.