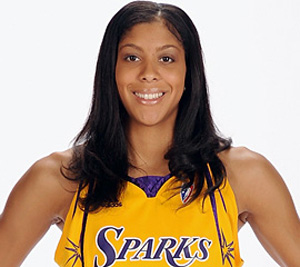 Candace Parker just had a baby. Will her WNBA career flourish and grow just like her newborn? The Sparks certainly hope so, as the team looks to build upon a moderately successful 2008 campaign.

Parker, who led the team in scoring in her rookie season last year, will be joined by league veterans and Olympian teammates Lisa Leslie and DeLisha Milton-Jones in forming a formidable trio worthy of dethroning league champions Detroit Shock.

With top-pick Parker, who nabbed both MVP and Rookie of the Year honors after averaging a team-best 18.5 points and 9.5 rebounds per game in addition to dishing out 3.4 assists per game, helping the team win 20 games last year, the Sparks finished third in the west. After advancing to the Western Conference Final, the Sparks lost to the San Antonio Silver Stars in three games.

This season, the Sparks definitely have the elements in place to advance past the conference finals – a veteran leader who can defend in Leslie, a budding superstar who will soon be a household name in Parker and an emotional floor general with explosive scoring ability in Milton-Jones.

After recently giving birth, it was announced Parker will miss an undetermined amount of the 2009 season. Yet, with solid role players in (the recently acquired) Noelle Quinn, Betty Lennox and Tina Thompson, the Sparks should be able to hold fort and remain near the top of the standings and set up for a title run once Parker returns to the hardwood.

With a strong defense, solid chemistry and a Showtime-type offense, the Sparks have the pieces in place to win it all this season and will get a chance to make their case in the season-opener.