Away We Go: Even pregnancy can be funny with the right perspective. 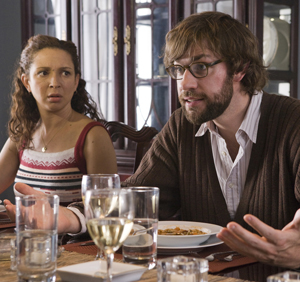 He’s a bright-eyed, all-American guy with good looks and charm that lingers even when he’s no longer in the room. She’s a funny lady with bantering wit and a sideways smile that makes any anxiety you may have had melt away like butter on hot cement. They are John Krasinski and Maya Rudolph, the stars of the newest flick by critically acclaimed director Sam Mendes.

Though Krasinski’s career skyrocketed when he began starring as Jim Halpert in NBC’s “The Office,” the spirited actor still cannot believe he was offered the role of Burt Farlander in the upcoming film Away We Go.

“I passed out and had a nose bleed,” admits the 6-foot-3-inch thespian. “Once I woke up, it was so cool. There was a part of me that thought, ‘Clooney is an incredibly complex prankster.’ He’s the type of guy who could get Sam Mendes to make that call. And then be like, ‘Remember when your life was awesome? It was all a joke.’ I’m pretty sure my entire career is a George Clooney prank, so I’d better enjoy it while it lasts.”

Away We Go is a darkly comedic look into the relationship of an unmarried couple expecting their first child. Krasinski’s Burt and Rudolph’s Verona are shocked to learn that Burt’s parents (Jeff Daniels, Catherine O’Hara) are moving to Europe – weeks before their first grandchild is born.

Seeking to be close to family and friends during this confusing and worrisome period of pregnancy, the duo jet across the country, even dipping into Canada, to visit an old associate (Allison Janney), a long-lost hippie cousin (Maggie Gyllenhaal) and college friends (Melanie Lynskey, Chris Messina). But what they must learn is the clichéd, age-old message of where home really lies.

The film teeters on the edges of both cliffs: uproariously funny and desolately emotional. But if you’re not sure whether to categorize this movie as a girl’s-night-out, bucket-of-tears chick flick or an appropriate-for-a-romantic-date comedy, Krasinski’s got it down straight.

“In all honesty, this is a movie I would see at the ArcLight and then be like ‘Oh my God, you guys have to go see this movie,’” says the man who plays Burt. “But you can’t when your name’s on the poster; that just sounds weird. I think that it’s really one of the more unique and special movies I’ve seen in a long time. If I could blank out my face I’d still see the movie.”

Rudolph, however, reaches a rather befuddled, inconclusive category of genre for the indie film.

“It’s a drama? A comedy? Sci-fi thriller? It’s a pordramacomraderie-drama-come-dotcom. It’s a pretty new genre, but I think we’re gonna get a lot of new films like it this year.”

Rudolph is such a kidster, which explains her background as an alum of “Saturday Night Live” (you may remember her best for her Donatella Versace impersonation). Though the set was non-stop laughs, director Mendes often had to crack the whip to get through scenes.

“Comedy’s a serious business,” relays the filmmaker. “Sometimes when you’re trying to make a scene funny, it can be the most difficult thing of all. I wanted it to be simple in terms of its story-telling – more rough around the edges. I wanted to be freer with it.”

His mode of directing parallels the moral of the love story: Nothing is too serious, and everything can be funny with the right perspective.

“I think it’s a comedy in the way that life is a comedy,” says a thoughtful Krasinski. “Life isn’t funny in the way of dogs biting you in the butt or running away from moving trucks. It’s more subtle than that, hopefully.”

Away We Go releases in select theaters June 5.