Throw Down Your Heart: A Heartwarming Musical History 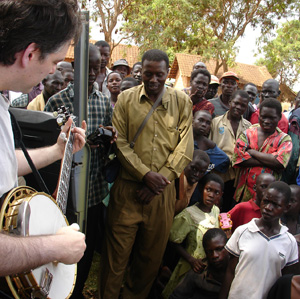 The banjo has long been synonymous with the South. With its quirky sound, it could be the guitar’s country cousin. However, in a fabulous twist of irony, this instrument, which appears to carry with it all the symbolism of white, confederate American isn’t Southern at all.

What most people don’t know is that banjos are an African musical instrument with traditions deeply rooted among native black people. Captured slaves were brought to the United States with incarnations of the banjo as well as the ability to construct them from scratch.

When slave owners banned captives from playing drums (sensing that drumming was a tribal call to arms), the Africans played handmade banjos instead. This practice was eventually adopted by the Southern landowners and soon the banjo’s fate was sealed.

Béla Fleck, the noted American banjo virtuoso, set out with director Sascha Paladino to “bring the banjo back to Africa” in the documentary Throw Down Your Heart. Fleck has built an impressive 30-year career around this ubiquitous musical instrument. He has won a whopping 11 Grammy Awards with over two dozen nominations across multiple musical categories.

Fleck teams up with many noted musicians on the continent and works with each to gain a better understanding of this complex instrument, its evolution and its exciting present state in music.

For most people in the United States, Africa might seem an unusual place to search for such an uplifting story. After all, the images that many of us see are of a war-torn continent, in the perils of hardship.

While it’s important that the rest of the world is cognizant of the plight of these people, it’s also imperative to showcase the vast amount of talent originating from this part of the world. No one supports that mission more than the subjects within the film.

“There is this negative thinking about Africa,” states Ugandan folk musician Haruna Walusimbi (who is featured in Throw Down Your Heart). “‘There is nothing good in Africa. They are beggars. There is HIV/AIDS. They are at war all the time.’ But that is just a very small bit of what Africa is.”

As Fleck’s journey begins to unfold, he visits and jams with villagers who have crafted a 12-foot marimba (similar to a xylophone). Paladino also places Fleck in the presence of a woman named Ruth who is thought to be the only female in the area who can play the thumb piano and records Fleck in an impromptu duet with her.

Fleck is an unusual sight to see as the documentary’s subject and yet, he makes perfect sense at the same time. After all, it’s not everyday that a white Westerner journeys across the world to get back to his musical roots.

Still, with his soft-spoken demeanor, he fits right in with the genteel and modest musicians whom he encounters. The musical interludes that result are enlightening and refreshing, and exactly what Paladino was shooting for. But it was a real labor of love to deliver those sights and sounds to the big screen.

“Well, you know we were in four countries,” notes Paladino. “How do you move five people, 15 cases of really delicate equipment through four countries in Africa?”

Ultimately, he and his crew were successful. Now Paladino hopes that audiences are able to extract not only knowledge but a new appreciation for banjo music. After all, he’s just blown the lid off centuries of musical perception.

“L.A. isn’t exactly a documentary town, so I’m hoping people will come out for the film,” Paladino says.

Throw Down Your Heart releases in select theaters June 5.