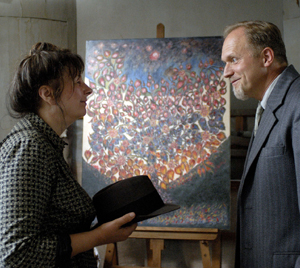 True, there’s no shortage of tales of artists gone off the deep end. It’s a thread that seems to repeat itself, woven into the fabric of art history. Martin Provost’s Séraphine tells the true story of naïve artist Séraphine Louis (or Séraphine de Senlis as she is better known) with a remarkable compassion and honesty that escapes the usual sensationalism that often taints films like this.

Once a modest domestic worker earning a meager living, Séraphine (Yolande Moreau) keeps her artistic creations to herself until one day she is persuaded to show her art to the woman whom she diligently serves. That her work earns little praise from the traditional art collector shows the popular opinion of the naïve art movement when first these frequently misunderstood works were introduced to the public.

This same work by chance attracts the attention of renowned German art critic Wilhelm Uhde (Ulrich Tukur), who has fled to rural France to escape persecution during turbulent times. Uhde encourages Séraphine to give up her mundane life of servitude and devote herself to her art, despite the jeers of those around her that would call her work immature and unlearned.

Circumstances of war tear patron and artist apart, but Séraphine soldiers on, honing her craft in secrecy, hoarding her paintings within her dilapidated flat. In time Uhde rediscovers her talent at a local art exhibition and elevates her to new levels of fortune, allowing her to truly throw herself into her craft.

But it seems that the deeper Séraphine becomes engrossed in the world of her renderings, the more quickly she drifts from sanity. Believing that her paintings are inspired by the whispers of angels with messages from God, her delusions engulf her fully until, just as she has at last begun to find fame, she spirals out of control.

Moreau and Tukur ignite the screen with impassioned performances, and Provost excels in capturing the story of an innocent overcome by the dark side of humanity with humility and grace.