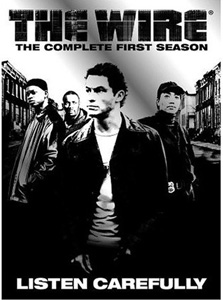 Summer is here, and there isn’t a movie for months that doesn’t have explosions. Luckily, you have time to catch up on all those classics that you’ve been meaning to see. After you’ve been through AFI’s lists and Roger Ebert’s you may be tempted to see some vapid, overblown sequel just for lack of ideas. So here is your list of antidotes to the summer blockbuster.

There’s nothing like developing a serious TV series addiction, watching episode after episode without commercials, with no weeklong wait between cliffhangers.

If you have never seen HBO’s “The Wire” you’re missing one of the greatest shows ever on television. Elevating the cop drama to a sociological inner city epic over five seasons, “The Wire” explored modern America – from both sides of the drug war to political maneuvering to the media to a crumbling school system.

And for those “Wire” devotees feeling a gaping hole in their lives since its run ended, it may be time to go back and revisit “Homicide: Life on the Street,” based on “Wire” creator David Simon’s non-fiction book about his year shadowing a Baltimore homicide department.

Arguably the pinnacle of American filmmaking, the 1970s own the copyrights to dozens of the greatest films ever made, with a deep list of prominent auteurs at the height of their talent. But the ’70s were more than just Chinatown and The Godfather.

Primarily known for his screenwriting on such films as Taxi Driver, Paul Schrader made his directing debut with Blue Collar from the script co-written with his brother, Leonard. Harvey Keitel, Richard Pryor and Yaphet Kotto star as Detroit factory workers who plot to rob their own corrupt union. Equally funny, heartbreaking, and suspenseful, it’s a truly original film and one of the under-seen gems of the decade.

In the 1950s and ’60s, after giving the American crime film its noir label, the French appropriated the genre and reinvented it with a cool, artful touch epitomized by Jean-Pierre Melville in films like Le Samouraï. Alain Delon stars as a hitman who lives by a samurai’s code and discipline.

After American director Jules Dassin (The Naked City) was blacklisted, he went to France, where he made Rififi, perhaps the greatest heist film ever made. The heist itself is a 30-minute totally silent nail-biting tour de force.

The mockumentary style is definitely popular right now, with “The Office” and numerous other sitcoms, but it’s nothing new. Woody Allen made his directing debut with Take the Money and Run, a hilarious fake documentary about an inept bank robber named Virgil Starkwell, who at one point tries to break out of jail with a soap-carved gun painted with shoe polish, which unfortunately melts when it starts to rain.

Peter O’Toole stars as an aristocratic mental patient who believes himself to be Jesus Christ in The Ruling Class, an absolutely scathing satire by playwright Peter Barnes. O’Toole is hilarious and the biting script has rarely been equaled for commentary and laughs.

No one is more consistently entertaining than the Master of Suspense. After you’ve seen the obvious ’50s/’60s masterpieces, delve further into his very fruitful middle years with Notorious and Strangers on a Train. Then check out his early British period with The Lady Vanishes, a breezy mystery set on a pan-European train ride.