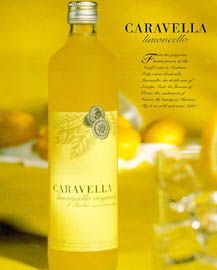 The Italians know a bit about eating, right? Well, after a good Italian meal, a lot of Italians like to indulge in a nice, Italian closer: a digestivo. The word translates into English, rather awkwardly, as "digestive."

The concept isn’t well known here. But it’s growing. And if you’re cutting-edge, with-it, sur le qui-vive, you’d better adopt it – at least for 20 minutes, until the next hot thing comes along.

In Italy, a digestivo is a little post-prandial glass of something, usually alcoholic, to round up the flavors of the meal. Its name implies that it helps you digest your meal. That makes sense, because the idea dates back to the medieval concepts of "bitters" – amari in Italian – brewed by monks from secret blends of dried herbs.

In those days the brews were taken seriously, as medicine. Today their curative powers have more in common with the old saying by W.C. Fields: "I always carry a flask with me in case I’m bitten by a snake. Which I also carry with me."

Technically, any after-dinner drink in Italy could be called a digestivo – brandy, port, scotch, even grappa. But the most popular ones are alcohol infused with something savory or bitter.

Some are a stretch for American palates: Cynar is an infusion of artichokes in grain alcohol. Fernet Branca is alcohol with St. John’s wort and 39 secret herbs. It’s touted as a hangover cure.

Then there’s limoncello. It is lemon peel infused into grain alcohol over a week to 10 days, sweetened with beet sugar, then filtered to a light milky color. Result: A slightly viscous drink that explodes in your mouth with tartness and sweetness, goes down easily, convinces you it’s helping your meal digest.

Limoncello infuses the memory of Paolo Sperone, 63, a wine man from Turin who spent school vacations as a boy at his grandmother’s estate near Bari, near the heel of Italy’s peninsular boot. "Some of my fondest memories are of helping her pick the lemons," he says.

When he became a man, Sperone got to taste her limoncello after grandmotherly meals, sipping it beneath the spreading walnut tree beside her home.

Peoples’ grandmothers tended to compete to make the best limoncello, recalls Sperone, president of Sperone Industries. But it wasn’t made commercially, or served much outside private homes, until about 15 years ago, when he and a few competitors got the idea.

Today, Sperone’s Caravella Limoncello is the biggest seller in the United States. That’s not saying much, though. Most Americans have never heard of the drink, and it’s only in the biggest markets – New York, Chicago, South Florida, a few others.

To be proper, you drink it like vodka: Keep the bottle in your freezer, pour it into small, chilled shooter glasses and serve. Don’t toss it down like a shooter, though. Sip it slowly, savoring it. And please don’t mix it with Jell-O.

While limoncello, which sells for $19 a bottle, is almost always taken straight, after dinner, in Italy, Sperone recognizes it will be hard to create that tradition overnight in America. So he has created a series drink recipes, pretty much unheard-of in Italy, to let us sip his stuff just about any time.

For a Limoncello martini, combine 1/2 ounce limoncello and 1 1/2 ounces vodka, shake with ice, pour into a martini glass and garnish with lemon peel. The Web site of Caravella’s U.S. distributor, www.bartonbrands.com, has recipes for Limoncello iced tea, Limoncello lemonade, even shrimp Limoncello and Limoncello custard tart.

And if you like that, Sperone has something else he wants to sell you.