Taking Back Sunday: A Fresh Start 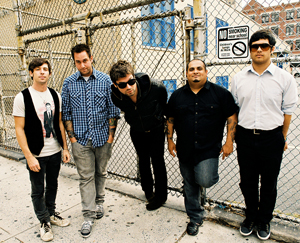 When Taking Back Sunday announced guitarist Fred Mascherino would be leaving at the end of 2007, it was an all too familiar position for fans. The band, which has recorded consecutive albums with the same members only once throughout its 10-year career, would be going through yet another lineup change. It’s only fitting, then, that the group’s latest incarnation is titled New Again.

“It was kind of an obvious theme that kept presenting itself while we were writing and rehearsing the record,” says guitarist Matt Fazzi, who was selected to replace Mascherino last May. “There was a lot of personal change that was going on for all of us. For me, it was going from a struggling musician to a great opportunity in Taking Back Sunday to live my dream and play music for a living.”

For the rest of the band – vocalist Adam Lazzara, guitarist Eddie Reyes, bassist Matt Rubano and drummer Mark O’Connell – Fazzi provided the breath of fresh air it had been searching for.

“We tried to wipe the slate clean and eliminate any walls about what Taking Back Sunday should sound like,” explains Fazzi. “This time around we really wanted to smash all that, start from scratch and really try anything.”

That included continuing down the hard rock path found on 2006’s major label debut, Louder Now, as well as toning down its signature dual vocal deliveries.

“It was kind of more of a thing where the producer, David [Kahne], was wanting to make Adam more of vocal point. So we tried to construct backing vocals that were a little more supportive of one main voice,” says Fazzi, although he hints the band might return to the dual vocal thing on the next record.

Meanwhile, Taking Back Sunday presented another kind of challenge for Fazzi. Originally from the progressive band Facing New York, he hoped to mix a different style into the band’s traditional format.

“I knew that we couldn’t go out and make like a Mars Volta prog record or anything like that, but I wanted to definitely bring some of that, like a little bit more of a thinking-outside-the-box sort of thing, to all the songs.”

However, the well-liked Mascherino left some pretty big shoes to fill, who himself had replaced the popular John Nolan years prior. Fazzi confesses there was some pressure in the beginning, but it didn’t take too long to win fans over.

“The way that the fans took to me, everybody was really positive about it, that the pressure kind of disappeared really quickly,” says Fazzi. “I tried not to be too scared about all the expectation. At the end of the day, you just got to be you. You got to be good and handle business and hope that people are down.”

Fazzi also hit if right off with his new band mates, whom he originally met on Warped Tour in 2004.

“We’d been pals for a while and stuff but joining the band was a different thing. I really didn’t know what to expect,” Fazzi admits. “I was really surprised and stoked to find out there was absolutely no ego within the band. Everyone was just normal.”

Fazzi’s life now, though, is far from normal.

“My life changed joining this band. This is a whole new thing for me,” he points out. “That’s why the record’s important. It’s the first time I’ve ever written music for a record that’s going to be out and available on such a large scale. It’s a dream, dude. As Piebald says, ‘We have the best job ever.’”

New Again is currently available. Taking Back Sunday will perform June 3 at the Grove, Anaheim and Sept. 17 at Verizon Ampitheatre, Irvine. For more information, visit takingbacksunday.com.

Interviews
Benny Blanco on his new song with Juice Wrld: 'It's hard to listen to now'
629 views

Interviews
Jewel reflects on her 1995 debut album, which sold 12 million copies and changed her life
904 views

Interviews
Shamir used to be an ‘accidental pop star.’ Now, the Philly indie rocker has come into his own.
691 views