Yet Another Season: Summer Music Preview 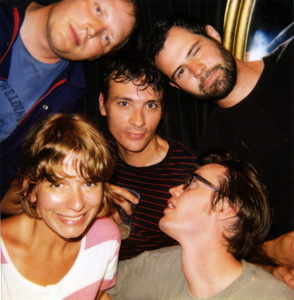 It seems it’s been a mere few months since the last seasonal music preview. Oh! But this is the case? So it is. This June sees a changing of the seasons and, thus, a new round of records to anticipate. Interestingly, much of what there is to look forward to is new releases from well-established artists. Let’s have a look-see!

Beginning yesterday, there was an eponymous record from the new project of ex-Distillers frontlady Brody Dalle, Spinnerette. She’s stopped singing like Jesse Camp and – well, this is what happens when you’ve left Tim Armstrong for Josh Homme.

Speaking of makeovers, there also was a new Elvis Costello record released, Secret, Profane and Sugarcane, a bluegrass/Americana effort that sees Costello collaborating with T Bone Burnett and Loretta Lynn.

Yesterday also saw (what will likely be) a final, posthumous release from the late J Dilla, whose Jay Stay Paid, came out on Nature Sounds. Recorded in the hospital just prior to his 2006 death, this 28-track album is a collection of his final work, compiled by Pete Rock and Dilla’s mother.

JUNE 9 brings Mannequin Men’s Lose Your Illusion, Too (Flameshovel) – a treat from one of the unexpected highlights of last year’s F Yeah Fest, and a much needed dose of garage rock when it’s oddly hard to come by.

On this date there’ll also be a brand new Sonic Youth record, The Eternal, which boasts gorgeous cover art and the option for an early listen (assuming you pre-ordered the record through Matador and earned a free digital download as early as April 28).

Since it’s likely that you don’t have $175 or, heaven knows, $450, laying around to spend on the Pixies’ box set Minotaur – containing all five of their studio albums, a DVD and reinterpreted artwork, sold in two different deluxe sets – forgo spending the week of JUNE 16, and save your cash for the following week, when everything is released. Also, keep on the lookout for news of astronaut Colonel Timothy Korpa, who’ll be bringing a copy of Echo and the Bunnymen’s Ocean Rain to space and returning it to the band once it’s entered souvenir status (Coincidentally, a box set reissue of the brilliant 1984 record was released May 30.).

JUNE 23 will be absolute madness, then; first, we’ve got a return from ’90s alt heroes the Lemonheads, whose covers album, Varshons, features vocal appearances by Kate Moss and Liv Tyler (milking her Empire Records connection, no doubt). Here’s to hoping the Lemonheads don’t fuck up their shot at Wire’s “Fragile.”

For fans of ’90s rock who never got into Evan Dando, the Breeders will be reissuing their records Last Splash and Pod (which, of course, makes for the second set of reissues to provide Kim Deal with fresh income).

There’s a new record from British female noise rockers (and frequenters of the Smell) Pre, called Hope Freaks, and Dark Side of the Black Moon: What Planet Are We On? by Japanese psych rockers Acid Mothers Temple & the Melting Paraiso U.F.O. While we’re lumping together all the foreign noise acts, Merzbow will release another installment of his 13 Japanese Birds series, Volume 6 of a series in which 13 albums are released over the course of 13 months, each a limited pressing of 1,000 with cover art by Jenny Akita.

Fans of friendly Swedes and ultimate party band Love is All have the release of Last Choice to look forward to, as they’ve taken a track off their 2008 record and turned it into an EP with five additional new recordings. The release somewhat coincides with their June 12 performance at the Echo, to which you should go.

Also well-timed is the release of Dinosaur Jr.’s new record, Farm, some pieces of which you can hear at the Troubadour June 22 or 23 – check them out on the 22nd, when they’re supported by stoner rock band Earthless.

What’s that? You don’t like fun? Lucky you – local (by way of North Dakota) folk singer Tom Brosseau is releasing, on June 23, new record Posthumous Success (FatCat). Brosseau, a frequent Largo performer, gets better with every release, and this follow-up to the nearly-perfect solo folk effort Grand Forks will surely be worthwhile, as will his June 20 set at McCabe’s in Santa Monica.

Also on this date, blue-eyed bluesman Otis Taylor will be releasing Pentatonic Wars and Love Songs, and fusers of all genres Tortoise will release Beacons of Ancestorship, their first full-length in five years.

No, I don’t like fusion, either. But I do like manly punk rock. So I’m going to skip ahead to JULY 7 and promote The Original Cowboy, Against Me!’s album of demos recorded in 2003 prior to the re-recording and release of their great As the Eternal Cowboy. There’ll also be a new release from Brooklyn’s Oneida (yes, Oneida!) called Rated O, and to spread the word, they’re bringing their lightly-psychedelic indie rock to the Echo July 12 – a band not to be missed.

Ah! But I’ve already forgotten that you don’t like fun. That in mind, then, by AUG. 4 there’ll be a release from Julian Plenti, a solo project by Interpol frontman Paul Banks, called Skyscraper. Admittedly, the first track available, “Fun that We Have,” is sort of an overproduced mess with the spontaneity of a “Full House” moral ending, but it may be a step outside of the Joy Division-wrapped box that is Interpol.

Later, on AUG. 18, there’ll be the Bay of Pigs EP from Destroyer, whose Dan Bejar sings his Hunky Dory-style anthems oh-so sweetly, and three weeks later (SEPT. 9), a return from electro-hip-hop group Anti-Pop Consortium, whose Fluorescent Black has likely resulted from member Beans growing tired of hitting play on a boombox at shows.