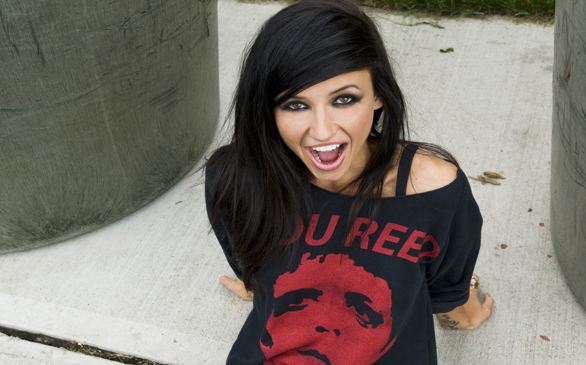 If you’re going to worship a pop songstress like a deity, let it be Tori Amos July 17 at the Greek.
(Credit: Karen Collins)

June 3 @ the Grove of Anaheim

I can think of no better way to kick off the summer touring season than with these guys here. Epic, honest rock that still makes you feel good about life, the Florida natives are the perfect soundtrack for those long summer road trips, so why not for the soundtrack of your summer concert-going as well?

This show was just too offbeat for me to not include. Everyone has at least one hardcore gamer in their life whom they still love regardless, I’m sure tickets to this will totally make their year.

If you’re bummed that Kings of Leon have blown up to arena venue proportions these days, Eagles of Death Metal will surely fill your need of old-fashioned Southern rock in the small and sweaty intimate venues you crave. And it’s a Josh Homme project, so you’ll leave slightly more sexually gratified than when you arrived as well.

Like anybody else who grew up in the ’90s, I’ve got a very special place in my heart for Mr. Stefani. Couldn’t name a current song of his to save my life, but hey, it’s the thought that counts, right?

A Loss for Words

I saw these guys perform acoustic for a couple weeks straight and not once did they lose my attention or bore me in the slightest. Seeing the full anthemic rock my favorite Bro-ston locals bring when they have all of their band members in tow should be nothing short of awesome.

I’ve long thought Metric were awesome and that they never quite got the attention they deserved. Now that KROQ is playing them, however, something is just weird about that. I want other people to like them … but the people I want to like Metric won’t find them sandwiched in between Avenged Sevenfold and Three Days Grace songs.

Have you guys looked at Neko Case lately? She’s nearly 40, and she’s still gorgeous. She’s what I imagine Jenny Lewis will be in 10 years, aging gracefully, being classy, kind of sexy and still rocking the heck out of any stage she sets foot on.

I could listen to Bat for Lashes’ Natasha Khan sing for hours and never tire of her delicate crooning. Soft and intricate, Khan still packs an epic punch with her voice as well as an intellectual bite to her words, both of which are masterfully intertwined with sweeping, evocative instrumentation. Basically, Khan is everything Lily Allen wishes she was (or thinks she really is, apparently).

You’ll be hard pressed to find cooler guys in the up-and-coming, indie-dance-rock scene than the ones in both of these bands. Awesome while separate, now get these two great flavors together for the price of one.

Fifteen years the punk rock summer camp has been going. It’s amazing to think how many bands have become household names after starting out on Warped stages, many of them listed elsewhere in this guide. Much as we might piss and moan about the lineups every year, somewhere in those hundreds of bands is the next big thing.

It wasn’t so long ago I was going to the Glass House to see Death Cab play shows, now they’re all grown up, getting married and playing shows at the Bowl. Needless to say, I’m having a proud parent moment right now.

Finally, Ace Enders is playing some headlining shows. Enders has earned his own stage by making some of the best music of his career after going solo.

I too was shocked Kris Allen won, even though I was playing for his team throughout the season. I just wanted a rightful second place finish for Adam Lambert ahead of Danny Gokey. I’m not as upset as certain parts of the Internet seem to be, and I’m content to just have Kris and Adam together on stage for this tour so they can have more precious moments (to later be turned into GIF-fueled Internet memes) and can frolic together like puppies.

If you’re going to worship a pop songstress like a deity, at least let it be someone like Tori Amos, y’know, with actual musical talent.

It’s Coldplay. Of course Chris Martin will make you cry.

I have to say, I’m impressed. Counting Crows have been together for 18 years, and they only have three former members. Some bands go through that over the course of one three-month tour. Any band who can hold together for that long must really love what they do. Apparently, Dustin Kensrue also loves them enough to cover their songs, so that’s good enough for me too.

Oh, they’ll be joined by the in-your-face Swedish dance-punk stylings of the Sounds? I’m totally there, love the accents.

And by the wholesome, but hard rocking up-and-comers Paramore? Sign me up, those kids work their asses off.

Go to this show mostly because I love, love, love Jack’s Mannequin. Frontman Andrew McMahon might just change your life after you meet him and listen to his brand of emotive piano-rock. No joke.

The Fray, despite how “adult contemp” they are, have been growing on me since I heard the “Heartless” cover, but then I’ve always been a sucker for hip-hop songs covered by Midwestern crooners with pianos and acoustic guitars.

If the Jonas Brothers were adults, wrote good music, had a real concept of what indie rock was, had some artistic credibility and could grow facial hair … basically the complete opposite of what they are now, I suppose you could say you would have Kings of Leon. I know it’s blasphemous to say, and I’m sure Caleb Followill has a Tennessee shotgun slug with my name on it now, but there’s something to be said for being able to bring indie-folk rock to the mainstream masses while still keeping your integrity intact.