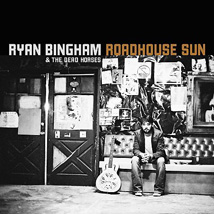 If you’re asking yourself whether or not Ryan Bingham is a country singer, the answer is yes. Yes, he is. Don’t let that steer you away from his sophomore album, Roadhouse Sun, though, as it’s filled with the American ideals that Jack Kerouac traveled across the country to find and Bob Dylan spent his life singing about.

Bingham’s album is refreshingly raw, and there’s nothing as powerful as a singer with just a guitar, stripped of all auto-tune. It is clear from the Louisville-twang in his voice that his experiences on the road have matured not only his lyrics but his style of playing as well.

“My band and I traveled a lot of the last couple of years, saw what shape the country has been in and experienced different points of views,” Bingham states.

Though a deeply personal and overall mellow album, Bingham still brings a touch of old time rock ’n’ roll in each song.