The Burnside Project: The Networks, the Circuits, the Streams, the Harmonies

(Bar None)
By Jack McGrue 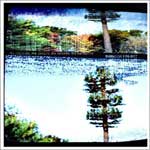 It’s hard to know what to say about The Burnside Project. There are so many commendable elements on The networks, the circuits, the streams, the harmonies, but the New York indie rock blip-pop duo has a penchant for spoiling their best work. Take "Only Ordinary," featuring Shannon McArdle of the Mendoza Line. With hyperactive drum-n-bass skittering all over the pulsing track like a frightened spider, and pensive guitar lending a slow sadness to the chaos, everything’s awesome except for one thing…that damn "polly wolly doodle all day" sample. Why?! At some of this record’s most beautiful moments, a self-defeating goofiness creeps in and just fucks everything up.

The most unfortunate part about this disc is that it’s often the vocals from Richard Jankovich (Burnside’s mastermind) that taint the tracks. The music–a combination of live instrumentation and electronic programming–is better suited to McArdle’s sugary haunting or the whisky-soaked ambling of guest vocalist Hub Moore. Jankovich dips into the bag of dorky singer tricks all too often: over-emphasized inflection, awkward spoken wordage and silly pop-culture references. To his credit, the geekiness sounds intentional, and there are times when Jankovich is comfortable with understatement ("Tilt-A-Whirl" is a great example). It’d just be nice to hear more often.