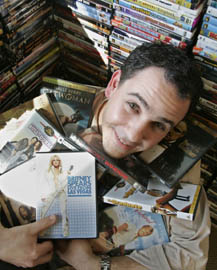 With a full-time job and two kids, Michael Shanafelt doesn’t have much time to watch movies. Seeing his Netflix or Blockbuster rentals collect dust on top of his TV – and paying a monthly fee for them – makes him cringe.

Then Shanafelt discovered Peerflix (www.peerflix.com), a DVD trading service that could do for movies what Napster did for digital music – only legally. No monthly fees. Just 99 cents a transaction. And Shanafelt can keep them as long as he wants.

"It’s not a Blockbuster or Netflix-buster, but it’s good for a guy like me," Shanafelt said. "Using it is definitely less expensive."

Although it shares many of the same characteristics, Peerflix’s system is the antithesis of Netflix’s.

Peerflix is entirely peer-to-peer, with users responsible for mailing movie titles to each other. Where Netflix is a rental business, Peerflix users take ownership of each DVD they receive in a trade.

Peerflix facilitates the trading with its Web site and a sophisticated e-mail alert system. Users publish "want" and "have" lists on the site, and the company tries to find matches.

Users pay Peerflix 99 cents each time they acquire a movie from another user. There are no monthly fees or costs to join.

"We kind of position ourselves as a hybrid between an eBay and a Netflix," McNair said. "We feel like if we can give a way for people to exchange the movies they have and no longer want for movies they do, and do it at 99 cents a pop in a no-commitment fashion, that’s a pretty compelling statement."

McNair views Peerflix as a complement – not competitor – to rental services. Movie buffs who insist on watching the newest Hollywood releases will probably have better results with rental services, McNair says.

But Peerflix is more cost-effective for users who want to keep DVDs for long periods or who want to trade in DVDs they own for other titles, he said.

But relying on users to maintain a library of titles, and to handle the distribution of DVDs, has pitfalls. Movies may not get mailed to other customers on time, and some users say the movie selection does not yet rival that of rental services.

McNair said many of the issues inherent in the peer-to-peer system are resolving themselves as Peerflix adds users.

"We feel like with a national aggregated peer-to-peer network, we’re going to be the ultimate in efficiency because we can have someone in Menlo Park deliver to Menlo Park and San Jose to San Jose, and it truly will be overnight delivery," he said.

Peerflix takes measures to keep its users honest. If a user receives a cracked or otherwise unusable disc, the recipient receives a rental credit. But the system also flags the accounts of both the sender and recipient so possible abuses can be tracked.

Building a robust library of movies will be key to the success of Peerflix. As of mid-March, Peerflix had about 10,000 discs – covering a smaller number of titles – available for trading. Netflix, by contrast, boasts 35,000 titles.

Peerflix entices users to contribute to the collective library through an online currency called "Peerbux." Users who agree to send out movies for trade earn Peerbux, which they can use to acquire other movies. The more movies users offer for trade, the more they can get in return.

One of the biggest challenges for Peerflix may be overcoming the initial reluctance of trading movies with strangers.

"It doesn’t feel natural at first," said Leslie Harrington, an early Peerflix user. "You went and paid for something, and you’re giving it away and getting nothing in return. But once the DVDs start coming in, you build trust. For me, it’s like the initial trust hurdle with using eBay and buying from strangers."