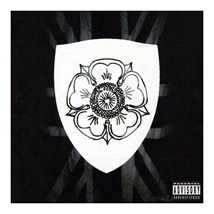 London natives Gallows built up a good amount of buzz while touring the United States two years ago, so suffice to say there’d be a lot riding on the follow up to their 2006 debut, Orchestra of Wolves. True to form, sophomore album Grey Britain delivers a stepped up game, but just because they have better production this time around doesn’t mean they’re anything close to commercially mainstream. Even the orchestral intro and outro, as well as the half-acoustic track “The Vulture (Acts I & II)” are haunting signs the band has not softened their biting edge in the slightest.

The album is raw, gritty, aurally concussive and yet, somehow still emotionally evocative all at the same time. This isn’t the watered down thrash-y punk you find late at night on any given music TV station, this is art meets piss and vinegar, a dark and grim film score that happens to have lots of gang vocals and guitar riffing in it. Every member of the band finds time to shine on the album, with the group sounding more cohesive than ever in delivering an epic landscape of a melancholic world seen through their eyes.