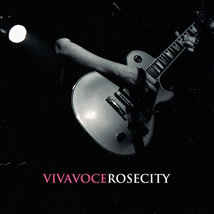 Portland’s Viva Voce has returned with Rose City, a perfectly composed little gem that harkens back to the late ’80s and ’90s when bands like Mazzy Star and the Jesus and Mary Chain were considered hot commodities. Founders Kevin and Anita Robinson wrote and recorded this latest effort in a mere month: emerging from their home studio with a raw, yet pristine offering that rings with undertones of longing and cynicism.

Rose City opens on a loop of distorted and warped guitars with “Devotion,” a rough and dark track ultimately sweetened and polished by Robinson’s backing vocals. The momentum continues with the catchy and danceable “Die a Little” that recalls simple ’60s garage rock beats mixed with modern angst.

The release ends on an ironic high note, with “The Slow Fade,” which compares a withering relationship with the fading out of a song. Atmospheric and laced with sampled soundscapes, the song collapses into a wilderness of distant ambiance that eventually eludes to the opening guitars of “Devotion.” This serves not only to creatively tie the entire little package together, but makes for a fantastic transition when the album is placed on repeat. And I guarantee that this is one album that you’ll want to play repeatedly.