Chain and the Gang, The Hive Dwellers: May 22 @ The Smell 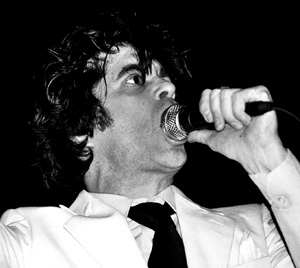 Ian Svenonius of Chain and the Gang
(Credit: China Bialos)

It’s been a while since the Great Lispy One, Ian Svenonius, last came to town for music’s sake, with his last band, Weird War. It was a pleasure, then, to see him preach against the dollar with new act Chain and the Gang, a K Records group that shares its lineup with supporting band the Hive Dwellers (fronted by Calvin Johnson).

Chain and the Gang was a ball, though – Svenonius, still perhaps the best frontman around, donned a spiffy white suit and ’fro, and made conversation as though it weren’t being spoken the way it was recorded, turning out all sorts of leftist talk that rambled into nonsense territory and let us know that there was still humor behind the rhetoric. He’s consistent as both writer and performer, truthfully. And he still spends his stage time hovering back and forth between speaking against the hypocrisy of liberty and taking a moment to go-go.