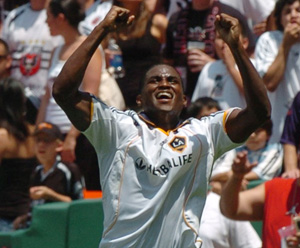 No Landon Donovan. No problem.

The Los Angeles Galaxy produced a superb 2-1 win on the road at Toronto FC Saturday afternoon although their star player was missing. It was the first victory for Los Angeles after earning five consecutive draws.

Donovan, the leading scorer for the squad, did not play in the MLS match due to national duty. USA hosted Honduras in Chicago the same day in a World Cup qualifier.

Forward Edson Buddle netted the game-winning goal with 13 minutes remaining. Buddle found himself on a one-on-one with the Toronto goalkeeper, but Buddle beautifully placed the ball with a curvy spin to the lower right corner of the net.

Alan Gordon gave the Galaxy an early lead on a header after six minutes, but Danny Dichio responded in the 62nd minute to tie up the affair.