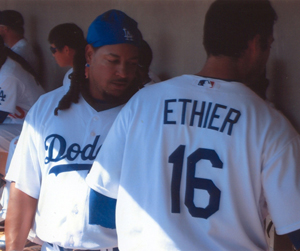 Ramirez and Ethier in the dugout during Spring Training 2009
(Credit: Tim Rudnick)

In the weeks following the May 7 50-game suspension of Manny Ramirez, no Dodger player was more affected than Andre Ethier. The power-hitting right fielder, who normally batted cleanup behind Ramirez in the lineup, sank into an abysmal slump, hitting just .171 with zero home runs and a pitiful three RBIs for the rest of May.

Speculation on Ethier’s sudden decline focused mainly on the different kinds of pitching he was now facing. The prevailing theory was that by pitching around Ramirez, most pitchers would save their good strikes for batters in front and behind him.

The unflattering implication was, of course, that Ethier had simply been enjoying a lucky spot in the lineup and with Ramirez absent he was just another mediocre ballplayer. What was generally overlooked in the whole conversation was the human emotional element.

It is true that Ethier’s performance at the plate improved dramatically upon the arrival of Ramirez in the lineup last season. But why? Was it merely because of tactical shifts by opposing pitchers, or did Ramirez’s presence provide something else?

Obvious to anybody who has observed the team social dynamic since Ramirez joined the club is that the young players simply adored Ramirez. Like so many fawning sidekicks they would surround him, cheer him on and sing his praises.

And no one seemed a bigger fan than Ethier, who once spoke of Ramirez as “putting the Dodgers on the baseball map.” The two outfielders could often be seen sitting by one another in the dugout cracking jokes and having fun.

Above Ethier’s locker in the clubhouse there still hangs a baseball card showing the two outfielders with the words “Power Plus.” It is fair to say the young Ethier idolized the dreadlocked veteran.

One then can only imagine how devastating the news of Ramirez’s suspension must have been to Ethier. For baseball is, if anything, an emotional game.

The Dodgers would go on to lose three of their first four games without Ramirez. But while the rest of the team managed to pull themselves together, Ethier slipped into one of the worst funks of his career. The absence of his friend and hero must have weighed heavy on his heart and extended to the tip of his bat.

In recent weeks Ramirez has been working out at Dodger Stadium with the stipulation that he may not be present near game time. It is interesting to observe in that same time the remarkable turnaround of Ethier who, since June 1, has batted .391 and smacked three home runs. On more than one occasion he has played hero by knocking in the game-ending runs.

When asked how Manny’s approach has influenced him when batting in clutch moments, Ethier replied simply, “You enjoy it and say, ‘Why not me?’”

While Dodger fans enjoy Ethier’s resurgence one can only guess how Ramirez’s return to Dodger Stadium has affected his biggest fan.