For the Win: Key Factors Necessary for the Ring 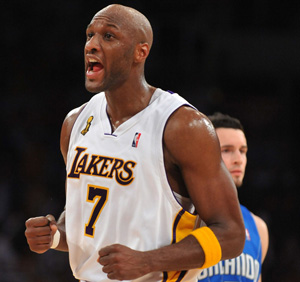 After blowing out the Magic 100-75 in game one of the finals Thursday at Staples, the Lakers came away with a hard win (101-96) in overtime Sunday night (also at home). As the L.A. squad heads to Orlando for the next three games in the series there are several points that Phil Jackson should be stressing in the locker room.

Staying out of foul trouble: In both matches Andrew Bynum has picked up unnecessary early fouls, so he spent most of his time on the bench. This put Pau Gasol, who lacks Bynum’s size advantage, on Dwight Howard.

Defense: Orlando shot just 23-77 for just 30 percent from the field in game one and were 33-79 (42 percent) in game two. Not only do the Lakers have to contain Howard under the basket, they must keep Orlando’s big men who are their major threats at the perimeter – Rashard Lewis and Hedo Turkoglu – under control.

Lamar Odom: In his 31 minutes off the bench Thursday, Odom put up 11 points and 14 rebounds. In game two he shot 8-9 for 19 points and pulled down eight boards. LO must consistently play at the level of intensity the finals demand, especially when Bynum’s on the bench.

Game four is Thursday in Orlando, and if necessary, game five is also in Orlando Sunday.