I Bleed Cardinal and Gold

Artist: What It’s Like to Be a True Trojan Football Fan
By Lauren Brodsky 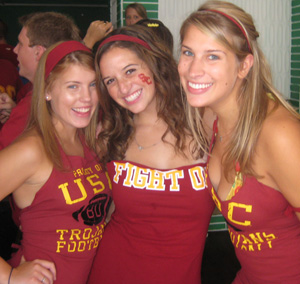 Being a true Trojan football fan is not just cheering on the team when they win, it is staying until the fourth quarter torch is lit in the Coliseum even if the Trojans are winning by 40, and it is crying in the stands if USC loses. A true Trojan football fan never gets tired of throwing up their fight on fingers even though the band plays the USC Fight Song more than 100 times a game.

A true fan never doubts year after year that USC will make it to the national title game and they bow their head and cheer every time Pete Carroll is seen on campus. A true Trojan football fan knows that UCLA is the heart of all evil and will stand and guard Tommy Trojan 24 hours a day from Bruin attacks the week before the legendary USC-UCLA football game.

In Los Angeles, Trojan football is not just a college sport, but also a citywide event that draws 92,000 people to every home game many hours before kickoff to cheer on their beloved players. USC students and alumni have a sense of pride and love for their school that is unparalleled and cannot be matched by any other school in the country. USC fans set up their tailgates in the early morning all over campus with bars, TVs and tents and welcome their fellow fans all throughout the day.

One of the greatest things about USC football fans is that there is no certain age that defines the average fan. On game day, you are likely to see a young girl wearing a USC Song Girl outfit, a student with body paint from head to toe, a father playing catch with his son wearing a football jersey and an elderly man and his wife wearing their SC alumni gear loud and proud.