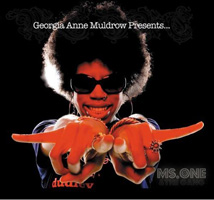 It’s been a couple of years since Olesi: Fragments of an Earth (Stones Throw), where, as a 23-year old, Georgia Anne Muldrow made a villain of Hurricane Katrina personified. Here she remains ballsy and throws in “Mr. President,” sharing some bold words with Mr. Bush and making her choices count even when (in 2008) to be anti-Bush was both cliché and necessary (“Mr. President/you must not sleep well … hey you/the man who killed the world”).

Ms. One is a compilation featuring guests like Black Milk and Big Pooh (on the bass-thick “2 MC”), Dudley Perkins – with whom she shares a child and a common tie to Stones Throw – and Stacy Epps, who sings the retro, jazzy “Motivation.”

Though the comp is a bit top-heavy, as a few tracks here are filler to some degree (Ms. Dezy’s “80’s Freestyle Skit” and Mortonette Stephens’ “Magic Walk,” which feels like a four-minute chunk of Nickelodeon’s “Gullah Gullah Island,” for two), the work here is overall solid. Georgia in production alter-ego mode, as Ms. One, has a jazz instrumental run with “Turiya’s Smile,” one of the best tracks here and an ideal soundtrack to, perhaps, Charlie Brown’s saddest turning point.

Muldrow, of course, is the star of Ms. One, and just as she brings a quality that’s simultaneously earthy, jazzy and hard as genuine punk rock, her freely flowing voice is a feminine counterpoint to her production, which for all tracks is raw, often lo-fi and brings an informal demo feel to nearly all recordings here.