Anti-Flag: The People or the Gun 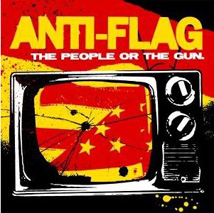 No, you’re not going to find anything new here. Justin Sane’s bitch-bitch-whine-whine vocals are somewhat hardened by barks and growls, and Anti-Flag’s poppy-punk style, L.A.-meets-Boston (by way of Pittsburgh, natch) is formulaic by now. What Anti-Flag does offer are lyrics relevant this very minute, even addressing this year’s bailouts (“I’ve seen a lot of bailouts in my life/but why is it I never see a bailout for the homeless and the poor? We’re so fucked!”), and the importance of taking responsibility when the government won’t (“we are the one/united under none,” from the anthemic “We Are the One”).

By far, the hardest hitting track here is opener “Sodom, Gomorrah, Washington D.C.,” rounding out a list of cities run by sin, destroyed by God, breathlessly likening the powers that be to “sheep in shepherd’s clothing.” Though Anti-Flag is poppy in the vein of modern punk, it’s the fire in this song that’s so desperately lacking from much of the genre of late, not to mention the band’s own catalog; that in mind, The People or the Gun loses strength after its initial three minutes, if only by contrast.


The People or the Gun is currently available.
Article posted on 6/9/2009
This article has been viewed 1511 times.