Love at First Bite: Get Ready for Season Two of “True Blood” 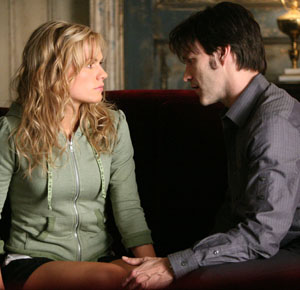 “True Blood” is set in a time when vampires not only exist, but they are fighting for their rights to live as “normal” citizens. Instead of feeding on humans, there’s a synthetic blood beverage called TruBlood that’s sold everywhere from convenience stores to neighborhood bars like Merlotte’s in the fictional small town of Bon Temps, La.

When centuries-old vampire Bill Compton (Stephen Moyer) decides to pursue mainstream life in Bon Temps, where he lived before he was “turned,” he finds a kindred spirit in a waitress at Merlotte’s, Sookie Stackhouse (Academy Award winner Anna Paquin). Like Bill, Sookie struggles to fit in with the community because she constantly has to keep her telepathic powers at bay. Since she isn’t able to read the thoughts of vampires, Sookie finds her only moments of relief when she’s with Bill.

Although her man-whore brother Jason (Ryan Kwanten) and best friend Tara (Rutina Wesley) frown upon the budding romance, Sookie can’t help falling in love with Bill. Also looming over the lovebirds is Sookie’s boss, Sam (Sam Trammell), who is not only in love with her but is hiding a big, awesome secret.

And know that “True Blood” is not even remotely close to the PG-13-ness of a certain other vampire love story – from its amazing opening credit sequence and bluesy “Bad Things” theme song to its graphic scenes of sex and violence. Based on the Sookie Stackhouse (The Southern Vampire Mysteries) books by Charlaine Harris, the TV series was created and produced by Alan Ball (American Beauty, “Six Feet Under”) for Christ’s sake. So, don’t even try and compare it to the tweenfest that is Twilight.

Season two promises to be quite interesting with the always-great Evan Rachel Wood (The Wrestler, Across the Universe) guest starring for two episodes as Sophie-Anne, the vampire Queen of Louisiana.

TV Time
(Almost) every show coming to TV this summer. And 29 that aren’t
286 views

TV Time
‘All Rise’ is the first TV drama to tackle coronavirus. Here’s how they did it
321 views