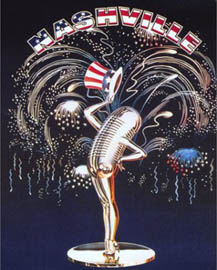 Don Roos – the director of 1998’s The Opposite of Sex and writer of such films as Love Field, Single White Female and Boys on the Side – will lead a discussion Friday evening, May 6, following a screening of Robert Altman’s 1975 film Nashville at the Skirball Cultural Center.

The screening and discussion is part of the Skirball’songoing monthly "Cinema’s Legacy" series, which explores how great filmmakers inspire other great filmmakers. The series allows a handful of filmmakers (actors, producers, directors, etc.) throughout its season to screen and discuss a film that, in one way or another, has served in encouraging and shaping their own art. Previous filmmakers featured as part of the series include Wes Craven, Rob Reiner and Wim Wenders, among others.

In Nashville – which stars Jeff Goldblum, Ned Beatty, Keith Carradine and Scott Glenn – Altman’s roaming camera follows a group of disparate individuals as the titular city they live in prepares for an upcoming and highly anticipated political rally. The characters cross paths at both the beginning and end of the film, which many critics believe is Altman’s (The Player, Gosford Park) examination of 1970s American politics.

The screening begins promptly at 7:30 p.m. and will be followed by a discussion with Roos. Admission is $10 per person for general audiences; $8 per person for Skirball, AFI, Union, Guild and ArcLight members; and $6 for students. Advance tickets can be purchased by calling (866) 468-3399 or by visiting www.ticketweb.com.