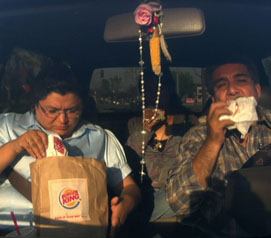 The Orozcos in Food, Inc.
(Credit: Courtesy of Magnolia Pictures)

“You might not be able to eat for a while after watching this,” warned the person sitting next to me as I sat down to watch this highly educational documentary.

But what ensued was a very mature, well thought-out, well put-together movie with some scandalous footage of animal slaughter, but not enough to make me, or even the average viewer, sick; just enough to create awareness.

And create awareness Food, Inc. does. I compare it to Fuel, another educational documentary released recently that advocated clean fuel. Food, Inc., from what I could tell, advocates a return to simple, smaller and higher quality farming and an escape from the nefarious techniques that large corporations have adopted to produce a lot of food very quickly.

I think that director Robert Kenner was able to do what the notorious Michael Moore has always failed to, and that is produce a somewhat fair and balanced documentary that points out the faults of the big guy, but doesn’t demonize him too much.

The most shocking fact in the movie for me, someone who is weary of debt, was how Tyson contracts chicken farmers to grow chickens for them. The difference between how much the chicken farmers actually make, and how much debt they’ve accrued from the chicken coops is pretty alarming. See the movie to get the correct numbers!