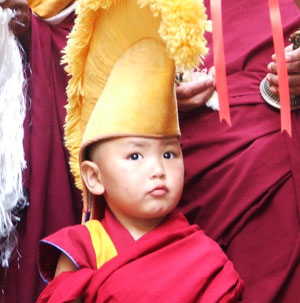 Unmistaken Child looks into a culture that still has faith in the power of religion.
(Credit: Courtesy of Oscilloscope Laboratories)

Buddhism is an ancient religion that has been around for thousands of years in countries throughout the east. Only recently have the notions of karma, meditation and reincarnation become a vogue thought in western cultures, which simplify them into bite-sized, mom-friendly concepts to be written on fortune cookies and printed into coffee table books for the intellectually elite.

If the average American who enjoys partaking in the important art of meditation and “zen” reflection knew exactly what it entails to be an active member of this religion, there would be far fewer Buddhists in a nation known for constant phone calls and coffee addictions.

In fact, Buddhist practices are physically and emotionally rigorous activities that require the participant to forgo earthly comforts in lieu of relying on the idea that our miniscule lives and bodies are nothing in the greater scheme of things. And as crazy as it may sound, we return to this earth after our death to suffer within its confines over and over and over again.

Unmistaken Child is a documentary that follows the four-year search for the reincarnated being of Lama Konchog, a world-renowned Tibetan master. He passed away in 2001 at the age of 84, but as a Buddhist master, Konchog chooses to return to this world in order to teach the new generation and to lead them on the path to enlightenment.

As decreed by the Dalai Lama, it is the duty of the deceased monk’s devoted disciple, Tenzin Zopa, to search for his master’s reincarnate ion. Tenzin, who had been in the service of Lama Konchog since he was 7 years old, sets off on this quest from village to village, performing rarely seen ritualistic tests designed to determine the likelihood of reincarnation. Tenzin eventually finds a young boy whom he believes is his master reincarnate and whom he presents to the Dalai Lama to make the final decision on the child’s past life.

Unmistaken Child is an intriguing piece of filmmaking that is neither pretentious nor demeaning. The audio is not the clear-cut sound of a Hollywood blockbuster, and the slow-paced narrative was not written by a screenwriter who leans toward the overly dramatic.

This film is, instead, a very detailed, thought-provoking look into a culture that still has faith in the power of religion. As “old” as their thinking may appear to our new-age mentality, there is something peaceful and, albeit, rational about Buddhism that translates well into this microcosmic story about one man’s nearly impossible search for his teacher and friend.


Unmistaken Child releases in select theaters June 12.
Article posted on 6/9/2009
This article has been viewed 1512 times.