A Wink and a Smile 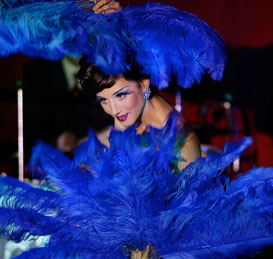 Miss Indigo Blue performs in A Wink and a Smile.
(Credit: Courtesy of First Run Features)

The term burlesque dates back to the early 18th century when it was used to describe musical shows that combined serious and comic elements in order to make a “grotesque” political statement. This form of theatricality often included risqué acts that ridiculed not only conventions of stage performance, but conventions of society as well.

The American form of burlesque has its origins in 19th century vaudeville and music halls. However, it was the reemergence of burlesque in the 1940s and ’50s that keeps people coming to performances even today. A populist blend of satire, performance art and adult entertainment, burlesque shows usually feature a striptease in conjunction with development themes and characters. In so many words, this is precisely your grandparent’s type of entertainment.

Filmmaker Deirdre Allen Timmons draws back the curtain to reveal an art form that is still alive and kicking, despite low acclaim and societal taboos. She follows 10 students of Seattle’s Academy of Burlesque as they endure six weeks of glitz, glamour and striptease to perfect their characters for a graduation showcase.

The Academy’s headmistress, Miss Indigo Blue, is a former-stripper-turned-burlesque performer who teaches the budding divas to shimmy, shake and do away with any negative perceptions they harbor about their bodies. The students consist of a homemaker, a doctor, an opera singer, a taxidermist, a reporter and a college student.

The unusual bunch may lead different lives, but they have one thing in common: They are women seeking, not only the revival of burlesque, but also the reemergence of feminine power through the repossession of their sexuality. And it’s not just the inexperienced students who steal the screen. Featured performers include the Shanghai Pearl, Tamara the Trapeze Lady, the Swedish Housewife, Waxie Moon, Kitten La Rue and Inga Ingénue, to name a few.

Timmons does particularly masterful work in emphasizing the duality inherent in women that most people, consciously or unconsciously, neglect. The job of the burlesque dancer is to rectify the relationship between a woman’s physical beauty and her dominance as a source of social power. You go, girl!