Will Zarifi: Salutatorian of the Class of 2009 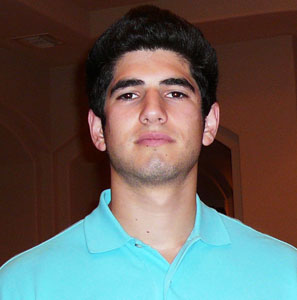 Journal Entry: Luck is a funny thing. It comes and goes when it pleases. Just because you are lucky once or twice, doesn’t mean you are going to always be lucky. As a matter of fact, no one is always lucky. You have heard of the guy who is always so lucky, but he is not. Go ask him. He has been unlucky plenty of times, trust me. Luck has played a critical role in my life.

In this age of instant digital connection, when USC announced its graduating valedictorian and salutatorians to represent the Class of 2009, I fired up Facebook and quickly saw that all the chosen scholars had marks of distinction in their fields: engineering, pre-med, music industry, business. The page of one, William Zarifi, was spare in its details but full of wall posts – birthday congratulations, wishes for a Happy Easter, a remark to tune in to an “all dave” radio station in Dallas. There were photos of a basketball game at the Galen Center. Pictures of a vacation embrace on a boat overlooking beautiful blue water. It was, unsurprisingly, the page of an adventurous, studious and evidently very popular Dave Matthews Band-and-SoCal-basketball-loving Trojan.

There was, however, one other picture that caught my eye. It was an SC basketball jersey with “Zarifi #1” on the back held aloft at center court at the Galen Center. After that, a photo of Will up on the Jumbotron. Another of head coach Tim Floyd alongside Will’s family. Then on his wall, amongst the many birthday wishes, one I’d missed: “Happy birthday William! Hope all is well up above – Party hard, angels can’t get hangovers (duh).”

Journal Entry: Obviously I have been very lucky with many things including my upbringing and everything that I have mentioned so far. However, one day of luck sticks out of my mind. It was a day that would change my life forever. Feb. 19, 2007. This was the luckiest day of my life. The day I found out I had brain cancer.

Each year, an anonymous group of senior USC faculty selects the graduation honorees.

“The committee felt strongly this year that Will Zarifi exemplified the Trojan spirit in all that he did – he was an extraordinary young man, and his fight against cancer is an inspiration to all of us at the University,” says Professor Gene Bickers, Vice Provost for Undergraduate Programs, who works with the Office of Student Affairs to help oversee the process. Raised as one of four children to Ahmad and Samia Zarifi in Tucson, Ariz., Will maintained a 4.0 GPA as a business administration major and manager of the men’s basketball team and was chosen as a salutatorian of his class.

But would Will be happy with his honor? Perhaps.

“William is a first place kind of guy. Had he still been here, he would not have settled for second,” says Linda Zarifi, Will’s older sister. “But looking down, I’m sure he’s honored and touched by the recognition that USC has given him.”

Will had set his sights on speaking at graduation as valedictorian, Linda says, and ultimately viewed his considerable academic success as a step towards a career of enacting empathetic, positive change in the world. She also remembers his stubborn resolve to continue his studies even as his cancer treatments became increasingly debilitating.

“During the spring break of his sophomore year, he underwent two consecutive intensive brain surgeries,” she says. “Somehow, some way, at the shock of all doctors, he was back at school on Monday. His classmates came back with great tans, he came back with a staples in his head! He didn’t mind at all, he was always happy to be him.”

Many of Will’s classmates and friends are quick to remember him with both small personal details and tales of near-mythic acts of determination.

Dario Hosseinyoun relates a favorite story in an essay he dedicated to Will:

“I was on my way to my final in May of 2008, and outside the business school I saw my friend and Will sitting on the bench.

‘What are you guys doing sitting here? Are you bored?’

‘Will just had a seizure and he wouldn’t let the paramedics take him to the hospital. He’s got a final in a little while.’

Even seizures could not stop him from getting to his classes and finals. His determination was unmatched and awe inducing,” Hosseinyoun writes. That day, many recall that Will was carried to class on the shoulders of his friends where he took – and aced – his final.

Says friend Mike Mac, “Will saw his cancer to be what it was, cancer and that’s it. He did not let that interfere with his life nor his studies,” he notes. “Cancer did not make Will who he was, Will made who he was and cancer was just taken along for the ride.”

“Will loved children and always wanted to give back,” adds Sara Brooks, friend of both Will and Linda. “In fact up until two weeks before he died, unbeknown to anyone, he was sending money each week to children in Africa.”

In his honor, Will’s family has established the William Zarifi Memorial Foundation to benefit underprivileged children locally and internationally.

“[Will] once told me that the worst thing about having cancer is being in the hospital and seeing young children who had cancer,” says Carley Campton, Will’s girlfriend, who is now pursing a career in nursing. “William’s story is continuing to inspire so many people not because it is a tragedy that he lost his battle to cancer at such a young age, but because in his short time, he was able to captivate so many by the incredible person he was.”

Count former USC men’s basketball coach Tim Floyd as one of those captivated.

“He just was a beautiful, beautiful young man. I’ll never forget him saying the day he was diagnosed with brain cancer, he viewed it as the luckiest day of his life. Not the unluckiest, but the luckiest day of his life,” Floyd says. “At the same time he became very close with my wife, Beverly, whose mother was diagnosed with pancreatic cancer. They’d both go online checking out different treatments for each other’s illnesses. Will looking for my mother-in-law, and my wife was checking on Will. And they emailed and talked everyday.”

“Very rarely, as a 55-year-old man, do you meet younger people who can impact your life, that you can learn from,” Floyd continues. “I can honestly say I that learned from this young man. I learned a great deal.”

Months before his death, Will wrote an essay which begins, “I am not a religious man…” In it he describes both the luck of finding a fortunate life and loving family and the luck of being diagnosed with brain cancer. He suggests in no uncertain terms that in life there is not a moment to spare or second to be wasted feeling cheated by the hand that fate has dealt.

Journal Entry: So where do I go from here? Unfortunately, there is no cure for brain cancer. I have to keep battling. Some say I have a life-threatening disease, I say I have a disease-threatening life. I will never give up and I know I will win.

Will Zarifi is forever salutatorian of the Class of 2009.