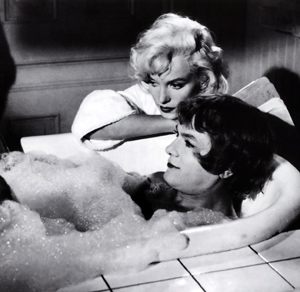 Marilyn Monroe and Tony Curtis in Some Like It Hot.

Tony Curtis is the last of the Golden Age dreamboats, and after growing up a poor Jewish boy in the Bronx, appearing in more than 100 films and sleeping with – by his estimation – nearly 1,000 women, he is ready for another close up, Mr. DeMille. The Jules Verne Adventures Organization, which runs the annual Jules Verne Festival, is honoring Curtis’ storied career with a themed day of red-carpet screenings, lobster buffets, escape artist stunts and autobiographical book signings throughout Downtown’s historic Broadway district – with the accepter of this year’s Jules Verne Legendaire Award present throughout.

The all-day event, billed “The Magic of Tony Curtis,” starts off at the legendary Million Dollar Theater with a matinee screening of 1953’s Houdini (2:30 p.m.), followed by an attempt at Houdini’s water torture stunt by escape artist Curtis Lovell II and a Q&A with Curtis. Follow the crowd to a tour of the nearby Palace Theatre, a primary location in the Houdini movie and a venue where the real Houdini once performed, then walk a few more blocks west to the Los Angeles Athletic Club for a Curtis-honoring cocktail and dinner party (replete with Curtis signing his 2008 memoir American Prince and another stunt by Lovell).

After filling up on baron of beef and smoked salmon canapés, the night continues with a 50th anniversary red carpet screening of Some Like It Hot (7:30 p.m.), the cross-dressing Billy Wilder comedy that is the night’s true honoree. Starring Curtis, Marilyn Monroe and Jack Lemmon, Some Like It Hot follows in the footsteps of Blade Runner, 2001: A Space Odyssey and The Birds as winner of the Jules Verne Legendaire Award.

Presented in part by the Los Angeles Historical Theatre Foundation and sponsored by the Los Angeles Conservancy – both of which have made great efforts to preserve and revive downtown’s once-dismal theaters – this Saturday’s event allows you to leave modernity behind and live like leisure kings of the pre-Vietnam era.

Between the newly-renovated Million Dollar Theater, the Los Angeles Athletic Club and a free-drink-with-ticket afterparty at a former power plant, this year’s Jules Verne Legendaire Award event is a chance to see the silver screen glory returned to downtown (The Tony Curtis sightings are just to make your grandmother jealous.).