He's Just Not That Into You and More 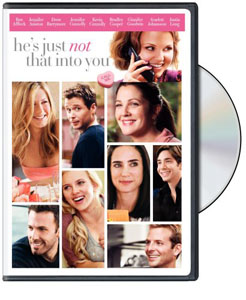 Defiance is a refreshing alternative to the typical Jews in peril Holocaust film, because it shows them taking their survival into their own hands and kicking a little ass in the process. Daniel Craig and Liev Schreiber star as two brothers who establish a refuge for escaped Jews in the Russian forest. Teaming up with Russian partisans, they fight to not only survive but to help win the war. The true story is inspirational and action-packed enough to overcome a somewhat lackluster script.

FX’s gritty cop show “The Shield” goes out with a bang as the seventh and final season comes to DVD. Michael Chiklis stars as the leader of an elite task force of dirty cops who get results. The show takes a hard-hitting look at L.A. crime and politics.

Janeane Garofalo joins the cast of “24” as it moves to Washington for its seventh season, with Jack Bauer (Keifer Sutherland) under investigation for high crimes. The real-time show is as addicting as ever.

Just in time for the movie, Land of the Lost: The Complete Series is now available in a collectible limited-edition lunchbox.

The intersecting lives and foibles of romance are at the center of the ensemble rom-com He’s Just Not That Into You, starring Scarlett Johansson, Jennifer Aniston, Drew Barrymore and Jennifer Connelly. Based on the bestseller by the writers of “Sex and the City.”

“SNL” alumni Amy Poehler and Rachel Dratch star alongside Parker Posey in Spring Breakdown, a Revenge of the Nerds with girls at the beach that doesn’t quite equal the sum of its parts.