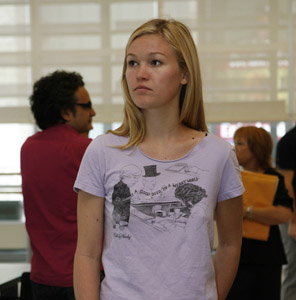 Best known as Nicky in The Bourne Trilogy or my favorite, Sara in Save the Last Dance, Julia Stiles returns to the stage to reprise her role of a university student trapped in a power struggle with a male professor in David Mamet’s “Oleanna.” Five years ago, Stiles, while still a coed herself, went head to head with Aaron Eckhart, a role now played by Bill Pullman, at the Garrick Theatre in London’s West End.

“Enough time had passed that I thought I wanted to revisit [this role],” says Stiles, in between rehearsals for her almost seven-week L.A. run. “It’s the kind of play that’s so fun as an actor because it’s very intense the way that Mamet writes the play, he forces you to listen to the other actor so it’s all about what’s going on onstage. For me it’s very enjoyable.”

“I guess I had a new perspective on the play five years later because I’m not in college anymore,” she adds. “The material is so rich I felt there was a lot more to explore.”

Stiles first became familiar with Mamet’s work (“Glengarry Glen Ross,” “Speed-the-Plow”) when she did State and Main (2000), a movie that he directed.

“I first became aware of Mamet’s work back in college,” she says. “It just clicked with me. He’s got a precision with words that’s remarkable. He’s got a knack when he’s writing his dialogue to show the way that people do not finish their sentences, they self-edit, they cut each other off. He writes his plays almost like a musical score, which I have a lot of fun decoding.”

Stiles also appreciate the rigors of stage work: “I feel like doing theater is like going to the gym for an actor. It strengthens your muscles.”

“I love how much you can be outdoors,” she says. “I love going hiking, to the beach. [And there’s] interesting, quirky neighborhoods; those nooks and crannies of this vast city are exciting.”