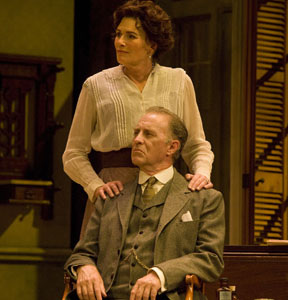 I have had many good times seeing performances at the Pasadena Playhouse. Unfortunately, this was not one of them. I wouldn’t say that this production of “The Little Foxes” was bad so much as it was boring. The minutes seemed to drag on as the play just sort of sat there in front of us. No set changes, no depth in performances and even the costumes could have been punched up a bit.

The actors churned out the dialogue on an even keel despite the fact that there were a variety of emotions to express, the only exception being Geoff Pierson as Horace Giddens. He soared when it was needed and sunk deftly when it wasn’t.

The production was especially disappointing as it is being presented as part of their “Women: The Heart and Soul of Theatre” celebration. Lillian Hellman’s classic was a strong choice with many possibilities, but it suffers from weak execution.