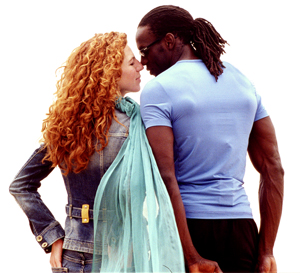 Droves of aspiring actors descend on Hollywood daily, desperately yearning to see their name in lights, their handprints in cement, their face peering down from a billboard on Sunset Boulevard. While many will eventually slink away, carrying nothing but a suitcase filled with crushed ambitions, some will rise victorious.

So what happens when a starlet’s small town dreams come true?

If you’ve cruised down Sunset recently, chances are you’ve seen Frederick’s waterfall of red curls, pillowy lips and commanding blue eyes intently watching the traffic as it flows past a billboard advertising her starring role in Henry Jaglom’s latest film – the prolific director’s 16th – Irene in Time, something Frederick is still both elated and baffled by.

“The whole glory of having a billboard is weird,” she confides, giggling.

The film is Jaglom and Frederick’s second cinematic collaboration, and they have since shot another movie together, Katie Q, as Frederick emerges as Jaglom’s protégé and muse.

“Creatively, it’s just a joy,” Frederick, whose enthusiasm and verve are palpable, sighs. “We’re on the same page about everything. I’m probably spoiled because I don’t know how often those relationships occur in Hollywood.”

Irene in Time is an investigation of father/daughter relationships and the lifelong impact they have. Frederick explains that Jaglom, father to a 17-year-old daughter, Sabrina, who briefly appears in the movie, has wanted to do a film about the complex relationship women have with their dads for many years.

“It’s the most personal film Henry’s made,” Frederick reveals.

It was also incredibly emotionally demanding on the actress, who says it “left me feeling naked. I have a great relationship with my dad, my dad is awesome, but the through line of the rejection of men is something I can relate to.”

While Frederick says she’s learned a tremendous amount watching Jaglom on set, their artistic symbiosis ends at the director’s chair, a space she is loath to enter. When asked if she’d like to follow in her mentor’s footsteps behind the camera, she squeals emphatically, “I would never direct,” practically scoffing at herself.

“I’m a terrible director! I’m definitely a control freak, but I’m also terrified of having control,” she laughs. “I’m much better at being told what to do.”

While auteur might not be on her agenda, cinematic evangelical is. Three years ago she founded what she calls her Field of Dreams: the Iowa Film Festival in her hometown of Mason City, best known as the inspiration for the musical “The Music Man.”

Iowa, Frederick says, is a state rich with artistic values and appreciation. When she visits home, people recognize her, but not from starring roles on screen, but rather from her turn as Miss Hannigan in a seventh grade production of “Annie.”

“People are really open and needful of art there,” she declares.

So she set out to create a yearly cultural event to showcase new films as well as inspire local filmmakers, ones, perhaps, who might not have realized their own creative inclinations.

“Last year, I provided cameras for people to make their own films, and it’s amazing,” she says. “People have really embraced it. I think Midwesterners underestimate themselves and their ability to contribute to the artistic world. I wanted them to know, yes, you can be an artist even if you’re in the middle of the country!” she insists with fist-pumping enthusiasm. “You don’t just have to be in L.A. or New York to make films; you can be a real artist anywhere. It’s really inspiring to see all these people feel that it’s at their fingertips.”

Interviews
'Crazy Rich Asians' made Henry Golding a star. Now he's showing Hollywood everything he can do
266 views

Interviews
Mary McNamara: After losing a child, 'Pieces of a Woman' filmmakers channeled their grief into art
445 views